OOPEAA wins competition for a residential neighborhood in Jyväskylä 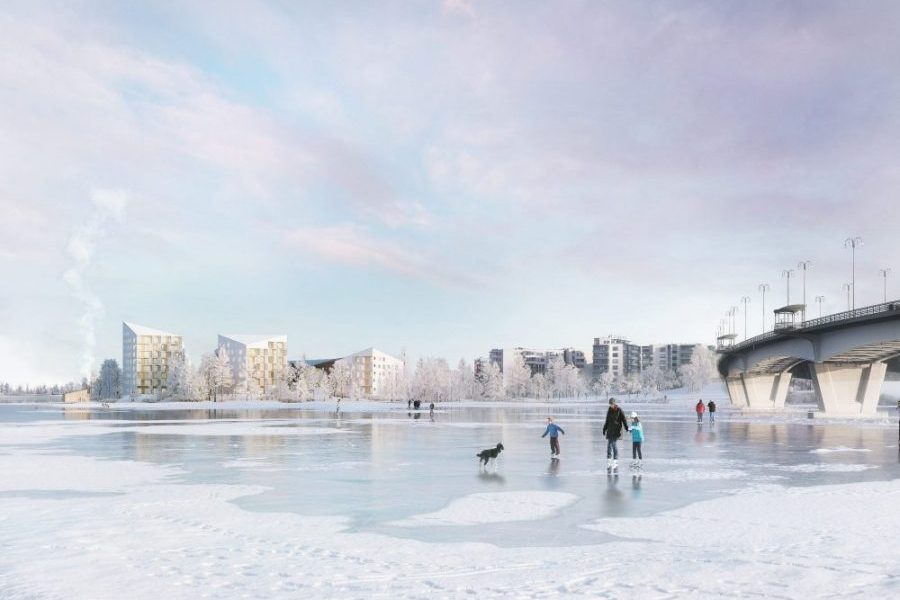 OOPEAA’s entry, Käpälä (the Paw) wins the invited architecture competition for creating a residential neighborhood in the Suuruspää area by the Jyväsjärvi Lake in Jyväskylä.
The competition was organized by Peab Oy in collaboration with the Association of Mother and Child Homes and Shelters of Middle-Finland and the City of Jyväskylä. The aim of the competition was to create a plan and design for a new residential area of high architectural quality with a strong identity in a highly visible place by the lakeshore in a way that respects the special character of the landscape and nature of the area while also providing an interesting element in the urban identity of the city.

The winning competition entry by OOPEAA, Käpälä, the Paw, proposes a combination of three-story buildings and up to eight stories high taller buildings arranged in a free from arrangement in such a way as to allow for views to the lake and to the southern exposure from each of the buildings.The shapes of the buildings with their diagonally angled faceted roofs depart markedly from those of the rest of the Kuokkala Shore. With their overall light color appearance they form a recognizable and unique silhouette.

The identity of area under design is characterized by its location by the Jyväsjärvi Lake in a site surrounded by a beautiful natural landscape with open views over the lake to the north and north-west to the Lutakko neighborhood. The location of the site sets high demands on the design of the buildings to be placed there as they will form a highly visible part of the landscape when viewed from the Kuokkala bridge and from across the lake.

The staggering of the building heights between three and eight stories allows them to relate to the scale of surrounding landscape in a natural manner. All apartments have ample sunlight and afford views to the most optimal direction depending on where the apartment is situated in the building. The floor plans of the individual apartments have been designed in such a way as to facilitate flexibility in combining several units and in varying the plan from floor to floor. The design with row of balconies running the entire length of the two facades gives each apartment a maximal amount of balcony space. It also serves as a protective zone between the apartments sheltering them from exposure to direct sunlight as well as from noise from the outside.

The faceted roof scape along with the light color of the overall appearance of the buildings in the plan give the area a character that sets it into a dialogue with the surrounding landscape in an interesting and well balanced way. The diagonally gabled roof shapes create a sense of variety and rhythm to the buildings and make them appear different when viewed from different angles. The shapes of the buildings depart markedly from those of the rest of the Kuokkala Shore, and they form a recognizable and unique silhouette. The lower southern-most building with its darker facade forms a harmonious backdrop for the taller light colored buildings.

The competition entry proposes an extension to the Suuruspää Park to extend to the south across the Suuruspäätie road. This would also allow the Rantaraitti lane by the shore to better serve the new housing area to be built. On the north shore of the area there will be a shared sauna serving the residents of the new housing area. The sauna affords views over the lake in three directions.