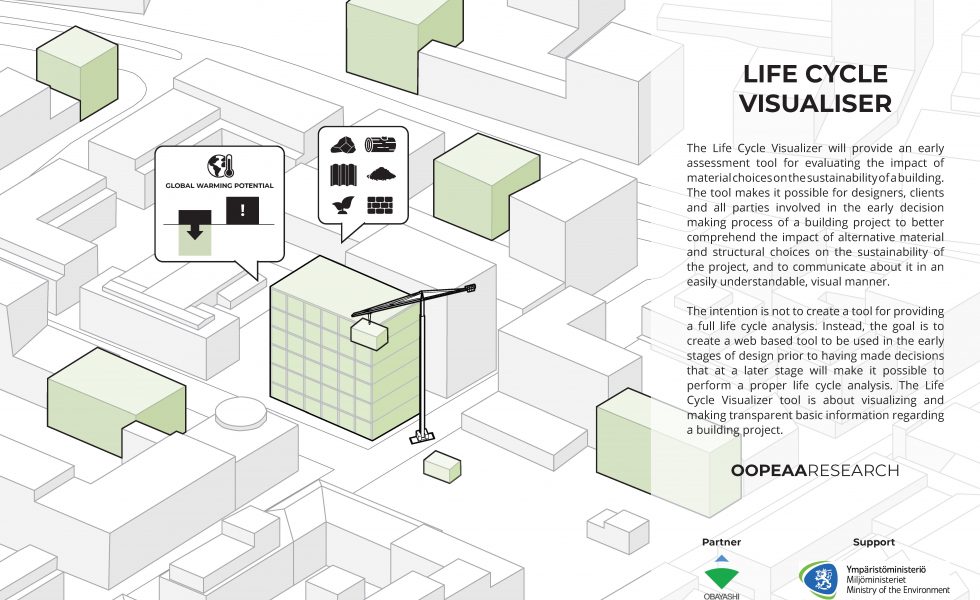 The Japanese Construction Company Obayashi is joining as an international partner in Life Cycle Visualizer project initiated by OOPEAA. It is a research and development project for creating an early assessment tool for evaluating the impact of material and structural choices on the sustainability of a building. The aim is to provide a tool that can be used in the early stages of concept design in order to help to guide the design process. The collaboration with Obayashi will provide a Japanese perspective to the project. This will complement the European perspective to sustainable building provided by OOPEAA. The partnership with Obayashi also brings a valuable contribution to the project by offering a constructor’s insight to the building process.

The Life Cycle Visualizer tool is about visualizing and making transparent basic information regarding a building project. The intention is not to create a tool for providing a full life cycle analysis. Instead, the goal is to create a web-based tool to be used in the early stages of the design process prior to having made decisions that at a later stage will make it possible to perform a proper life cycle analysis. The tool makes it possible for designers, clients and all parties involved in the early decision-making process of a building project to better comprehend the impact of alternative material and structural choices on the sustainability of the project, and to communicate about it in an easily understandable, visual manner.

Obayashi Corporation is one of five major Japanese construction companies. Its headquarters are in Minato, Tokyo and it is one of the Nikkei 225 corporations. Established in 1892 in Osaka,the company operates in Japan and 13 other countries, especially Southeast Asia and Australia, as well as the United States and Europe. Major landmarks built by Obayashi in Japan include KyotoStation Building, Tokyo Broadcasting System (TBS) Center as well as TOKYO SKYTREE, a broadcasting and observation tower that was the world’s tallest structure at the time of its completion in 2012 with a height of 634 meters.Obayashi has 86subsidiaries and 26 affiliated companies in Japan, Europe, The Middle East Asia, Australia and North America. It is listed on the Tokyo Stock Exchange.

The research and development project for creating the Life Cycle Visualizer tools is supported by a grant awarded by the Ministry of Environment, Finland. The grant is part of the Growth and Development from Wood Program.

For more information about the Growth and Development from Wood Program, see here