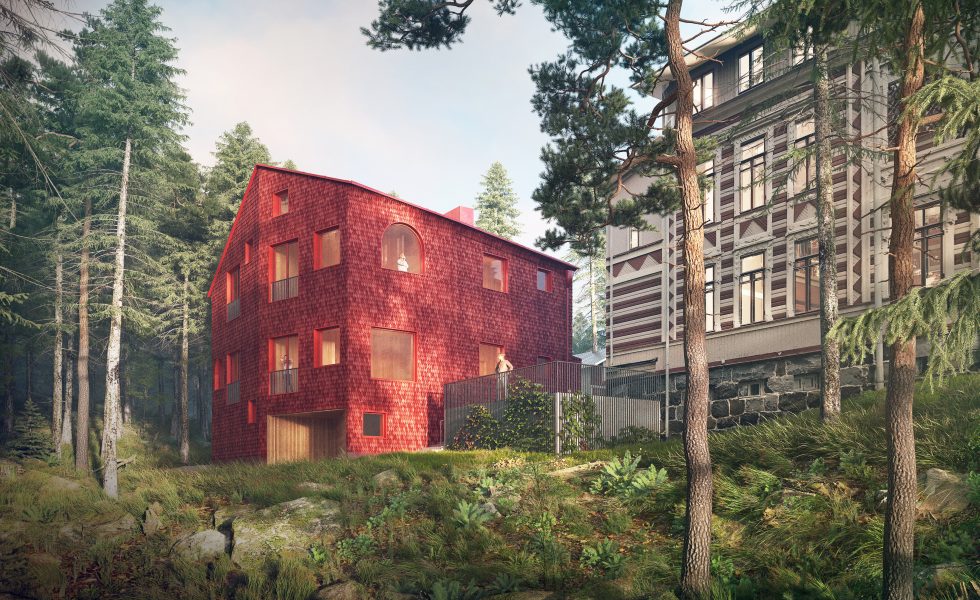 OOPEAA has been commissioned to realize the restoration and renovation of the Rauhanlinna Manor in Savonlinna, Finland. With its rich ornamentation and intricate detailing, the Rauhanlinna mansion completed in 1900 is a unique example of Russian style wooden manor houses in Finland. With a rare combination of Arabic influenced pillars and Swiss inspired decorative wood carved details, the Rauhanlinna mansion with its surrounding parkland is landmarked for historic preservation as a culturally and architecturally valuable milieu. Today, it is in need of restoration and repair, and its new owners, Kyösti and Kari Kakkonen have decided to undertake a major restoration and renovation project to repair the main building as well as to bring the rest of the manor with its supporting buildings to contemporary standards. In order to bring new life to the Rauhanlinna Manor as the active place of meetings and social life that it once used to be, a new guest house will be built to accommodate the needs of visitors and all together three new sauna buildings will be created. The old sauna by the lake will be replaced by a new one. In addition, the old stable building will be turned into a sauna, and one additional new sauna building will be built. The new additions will be designed by OOPEAA who will also be in charge of the restoration of the old main building. The project is realized in close collaboration with the National Board of Antiquities who is in charge of supervising the restoration of historical landmark buildings in Finland. The building permit for the project has now been granted and the restoration work along with the new construction has already started. The project as a whole is slated to be finished in the summer of 2021. In the restoration and renovation project for the Rauhanlinna Manor, it is important to strike a balance between the unique character of the old mansion and the new buildings to be built. The goal is to create an interesting dialogue between the richly ornamented old mansion and the new buildings in a way that allows for both the old and the new to engage in a conversation as equal partners each with their own voice and tone. A new layer of architecture with a strong character of its own will be added in a way that respects the unique qualities of the culturally and historically valuable milieu as a whole. The mansion will be complemented with a set of new buildings that help to improve the functionality of the manor. Some of the buildings added in later years to the manor will be torn down and replaced with new ones while some of the supporting buildings will simply be fixed and upgraded to meet the contemporary standards.

The new guest house, Käenpoika (the Cuckoo Chick), introduces a contemporary layer of architecture to the Rauhanlinna Manor. With its strong sculptural form and red shingle cladding it engages in a dialogue with the other buildings in the yard. As a wooden building with a pitched roof, the new guest house brings together traditional methods of building and new ways of using wood. The loadbearing structure in the new building is of CLT (cross laminated timber). This makes it possible to realize the construction in a time efficient and ecologically sustainable manner. The use of shingles in the facade cladding is a traditional solution that binds the new building together with the historical nature of the manor. While the red color continues the traditional color palette of the wooden buildings on the yard, the decision to paint the shingles red strongly deviates from the tradition. Wood is strongly present also in the interiors of the guest house. The carefully designed composition of openings continues the theme of deliberately framed views that is characteristic to the old mansion. Like in the old mansion, also in the new guest house each room offers a different view into the surrounding landscape and has a unique atmosphere of its own.