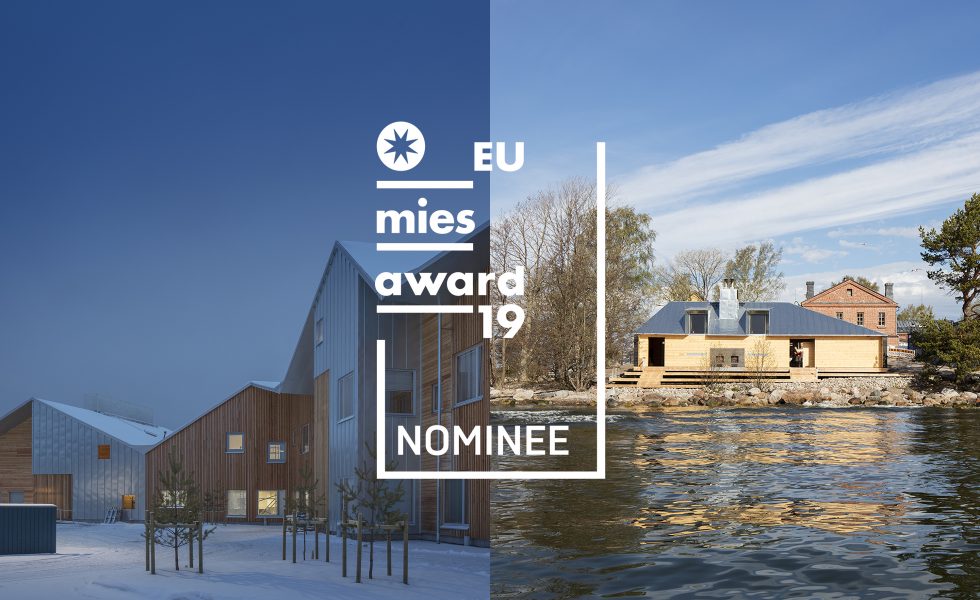 We are happy to announce that two buildings designed by OOPEAA have been nominated amongst the candidates for the European Union Prize for Contemporary Architecture – Mies van der Rohe Award 2019.

Launched in 1987, the European Union Prize for Contemporary Architecture – Mies van der Rohe Award is one of the most prestigious acknowledgments for European architects. Funded by the EU Cultural Programme and the Fundacio Mies van der Rohe – Barcelona, the biannual prize gives credit to professionals who are developing the architectural practice through new ideas and technologies, to build better spaces and cities.

We are glad to see the work of OOPEAA nominated once again as candidates for the prize, this time with two projects, the Lonna Sauna, a contemporary public sauna made of hand-carved logs on the Island of Lonna just a ten-minute ride away from the very center of Helsinki, and the Taika Kindergarten, a space designed with the needs and scale of the children in mind to create a place of daycare and overnight care well in line with the values the Nordic culture.

The work of the office has been nominated also in several previous editions of the prize. In 2017, Puukuokka One, the Suvela Chapel and the Periscope Tower were all three nominated for the award, with Puukuokka One and the Suvela Chapel both included in the final shortlist of 40 projects for the 2017 award. Kärsämäki Church and Kuokkala Church were selected as shortlisted projects respectively in 2005 and 2011, and House Riihi was nominated for the 2015 award.

Lonna Sauna, which opened to the public in 2017, offers a refuge from the hustle and bustle of the city and its busy everyday. Situated on the small island of Lonna just a ten-minute boat ride away from the Central Market Square in Helsinki, it gives a contemporary expression to the tradition of public saunas in Finland and provides a chance to enjoy the special bathing experience offered by the wood heated sauna in the Finnish archipelago.

With views framing the silhouette of the city on one side and opening towards the see on the other, the compact 190 m2 sauna is built with masterfully handcrafted wooden logs that are left untreated. It has a sculptural pitched roof in zinc plate. Heated with wood-burning stoves the Lonna Sauna recreates the calm and almost sacred feeling of the traditional Finnish sauna, while placing it in a new, contemporary architectural frame. The skillful use of larch in the furnishings and the large windows opening a view from the sauna loft into the archipelago create a soothing and relaxing atmosphere. A terrace directly accessible from the sauna rooms as well as from the outdoor shower space bridges the sauna with the seashore.

You can find more images and information about the Lonna Sauna here. The Taika Kindergarten building is carefully designed with the needs and the scale of children in mind in order to provide them an experiential and friendly space. Taika opened its doors to serve Seinäjoki families in January 2018, and it has been well loved by the staff and the children alike since the beginning.

Despite the relatively large number of children served (225 children in daycare and up to 60 children in overnight care at a time), Taika offers a home-like scale. Taking its cue from the Ostrobotnian traditional barn in the open field, Taika is shaped like a large barn. Yet, it is colorful and full of light and its star-shaped plan serves to provide rhythm and to create a sense of a home like scale. With its flexibly adapting naptime spaces, its highly practical foyer areas equipped to deal with the challenges brought along by the Nordic weather and the high demands it poses on handling children’s outdoor clothing, as well as the pockets of loosely separated outdoor areas each with its own porch to provide shelter from rain and to serve children of different age groups, the Taika Kindergarten is a great example of the contemporary Nordic approach to the design of kindergarten buildings.

You can find more images and information on the Taika Kindergarten here.