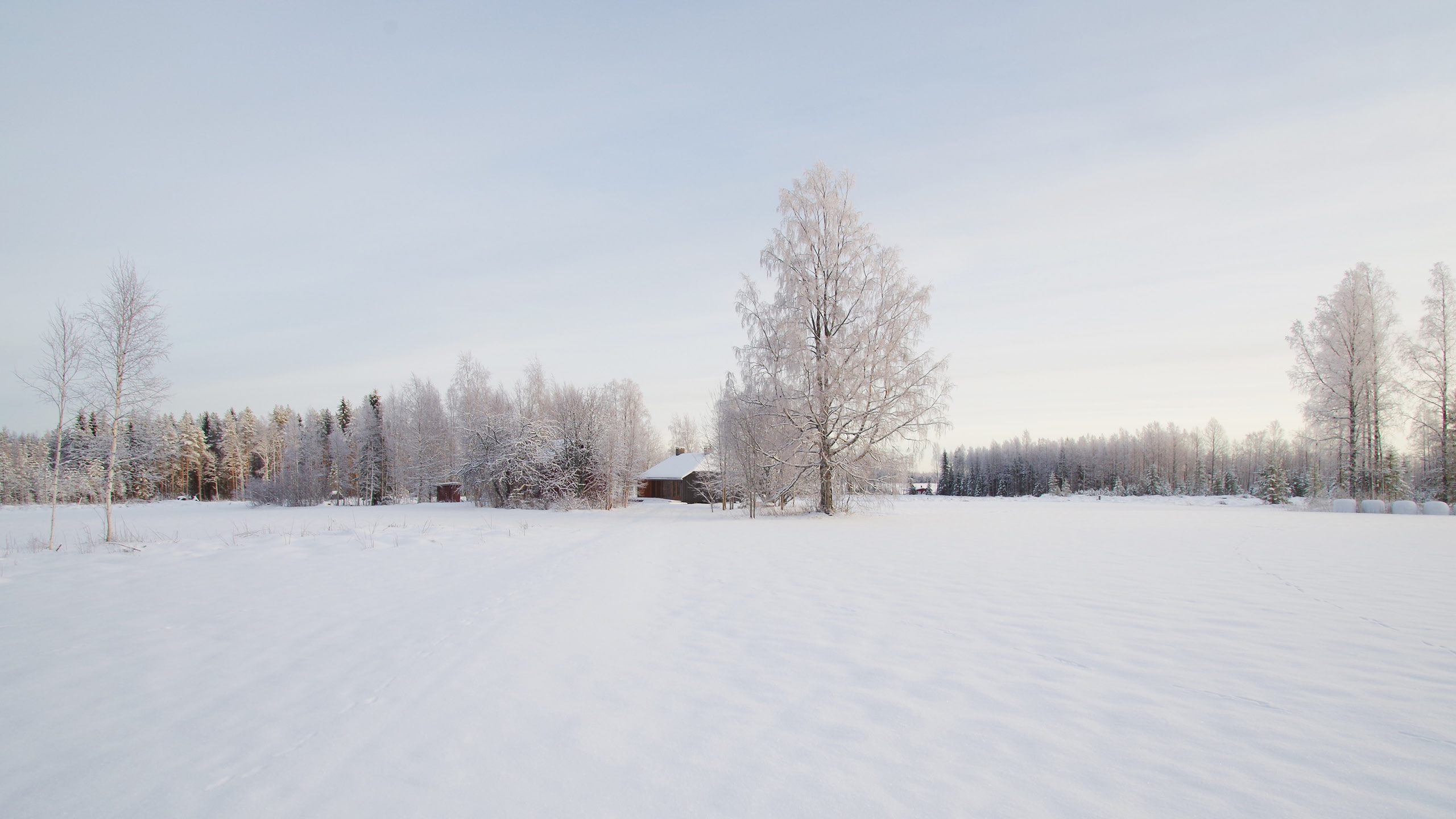 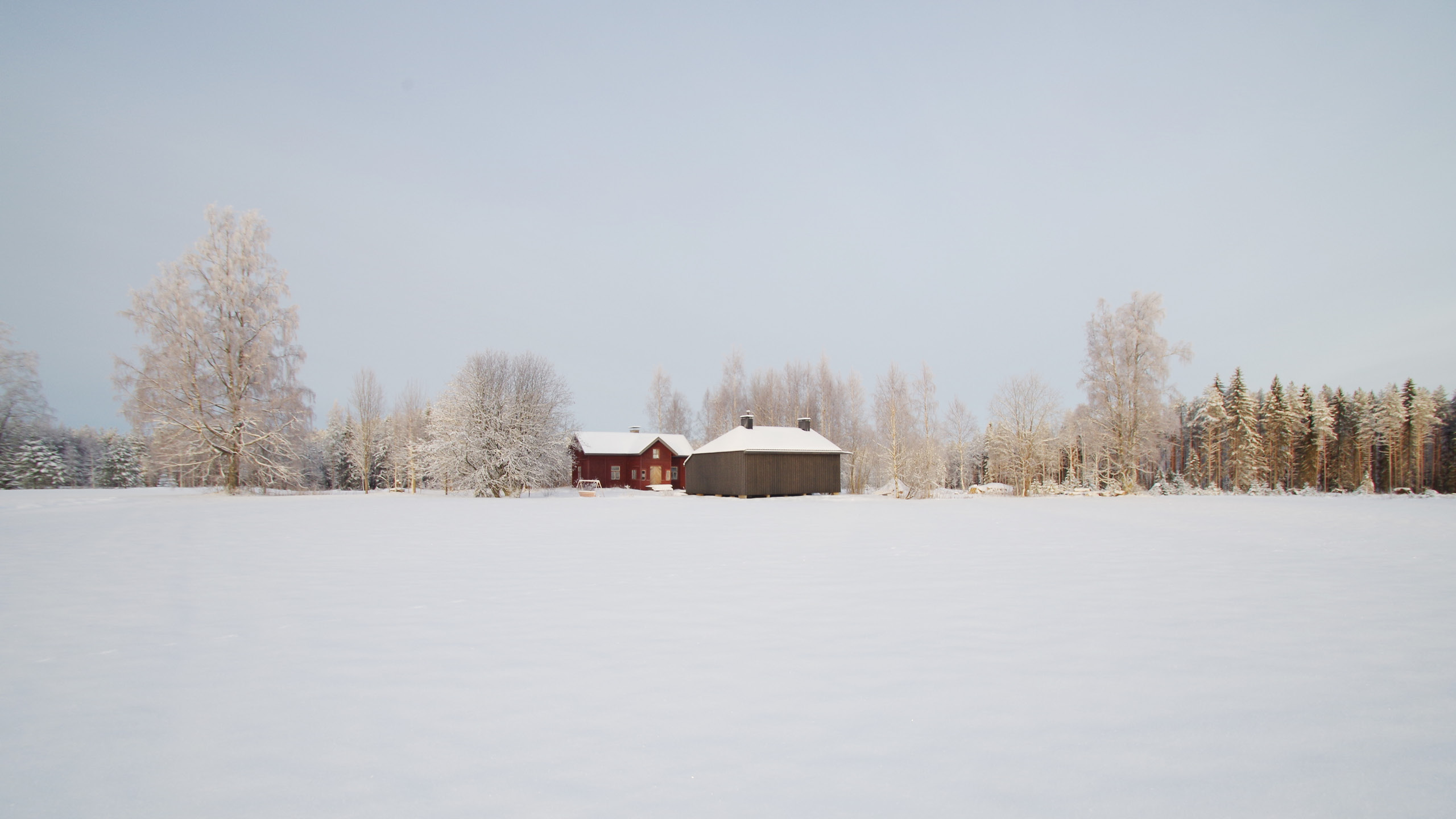 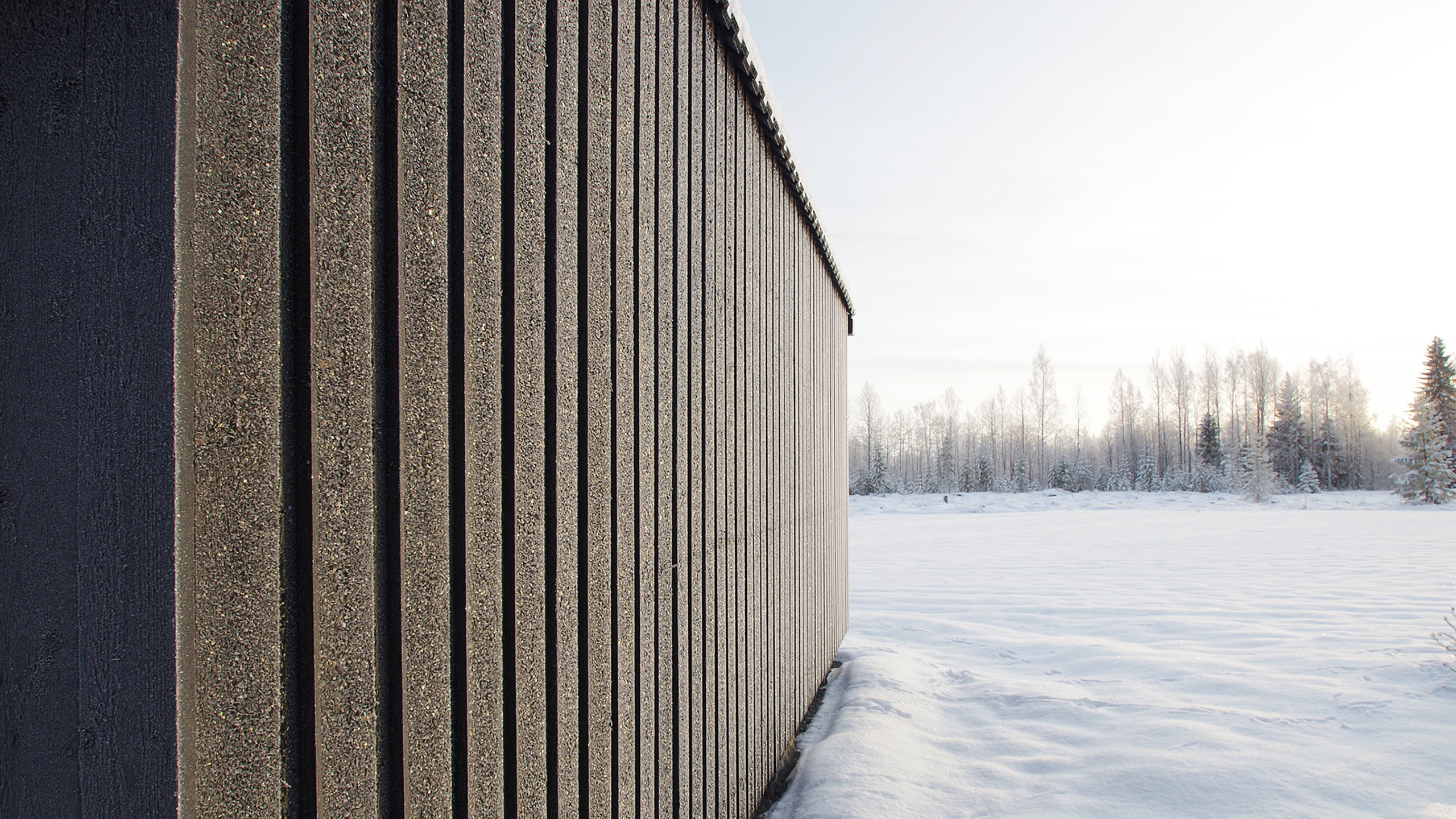 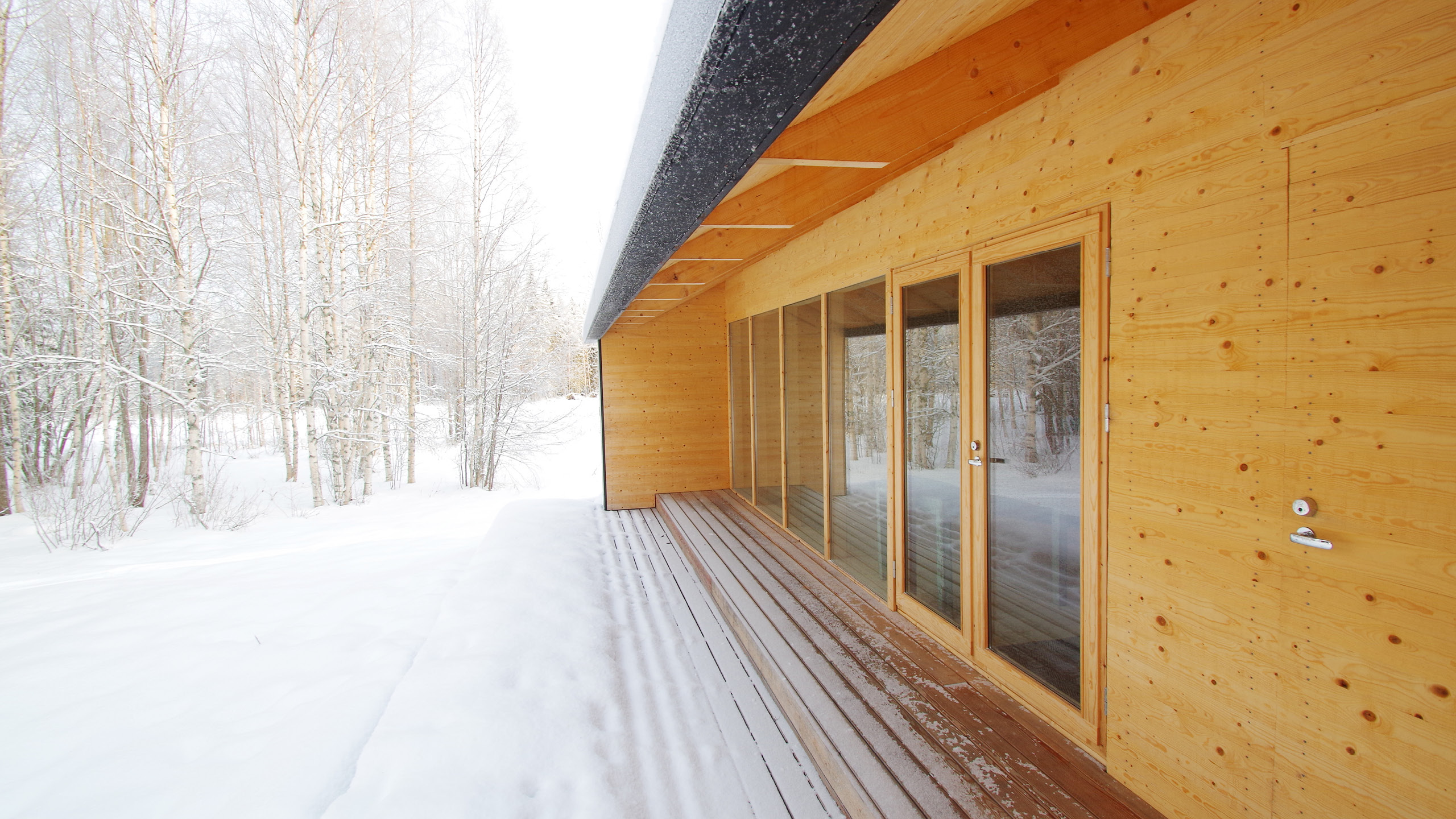 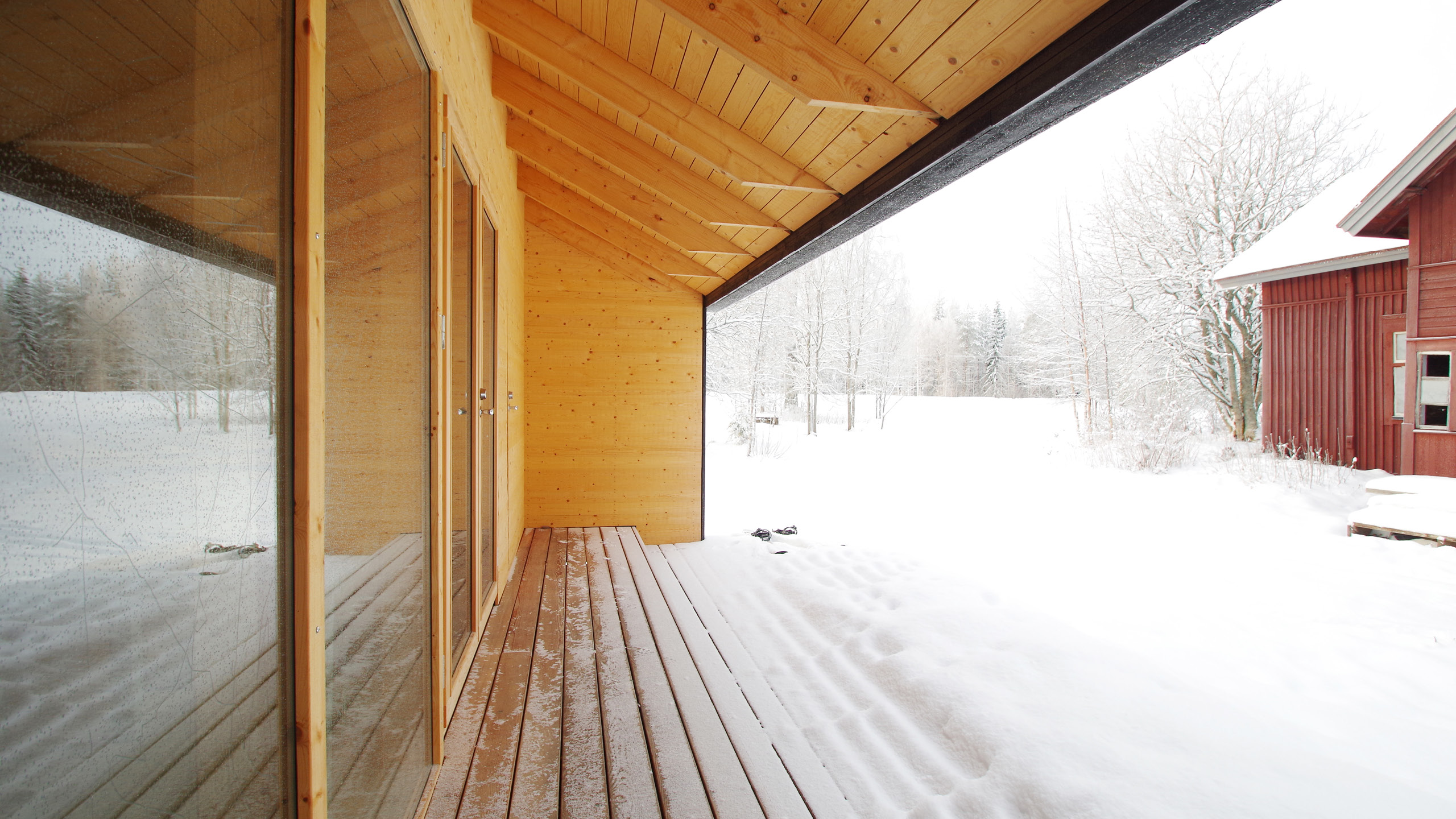 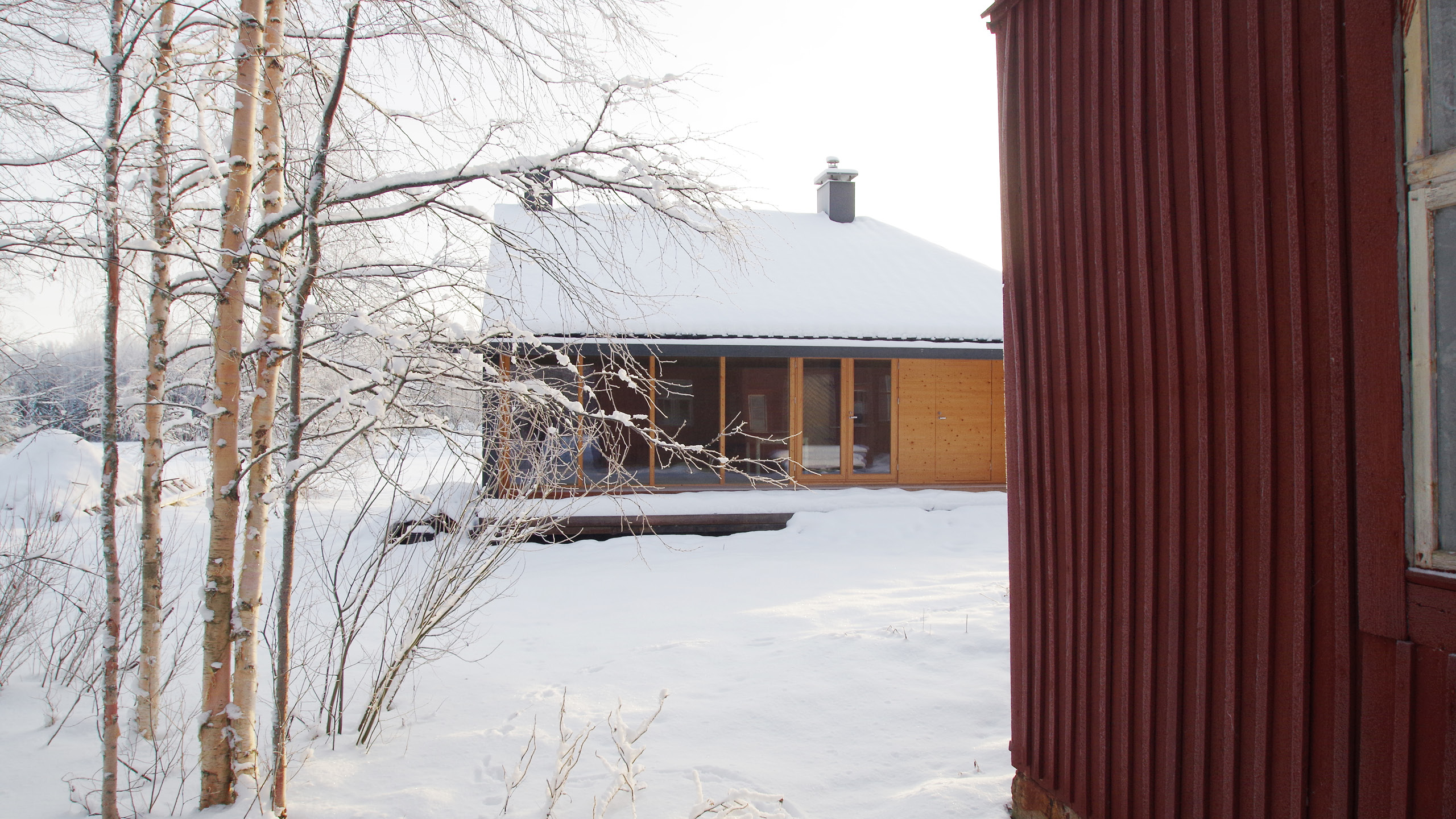 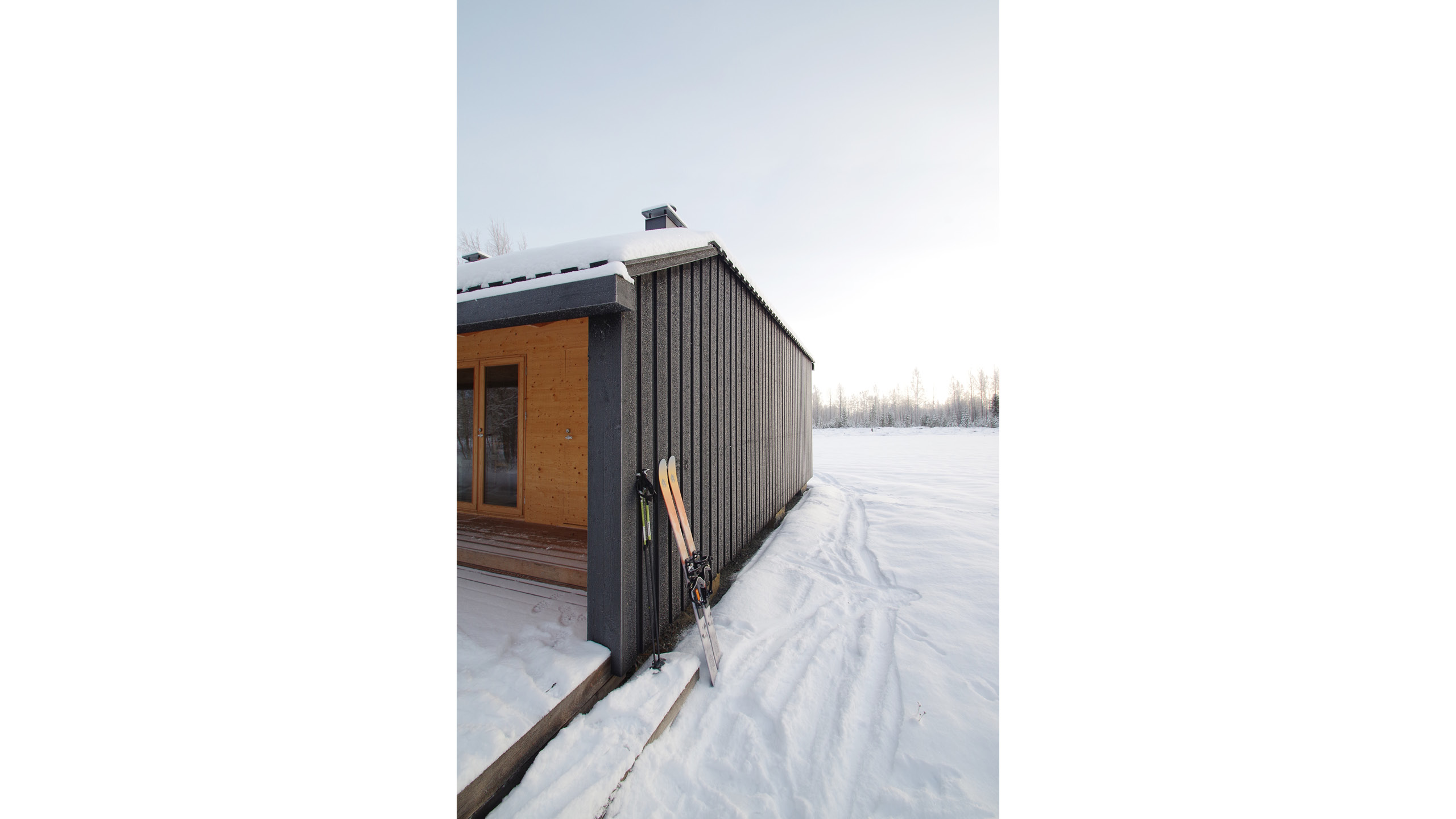 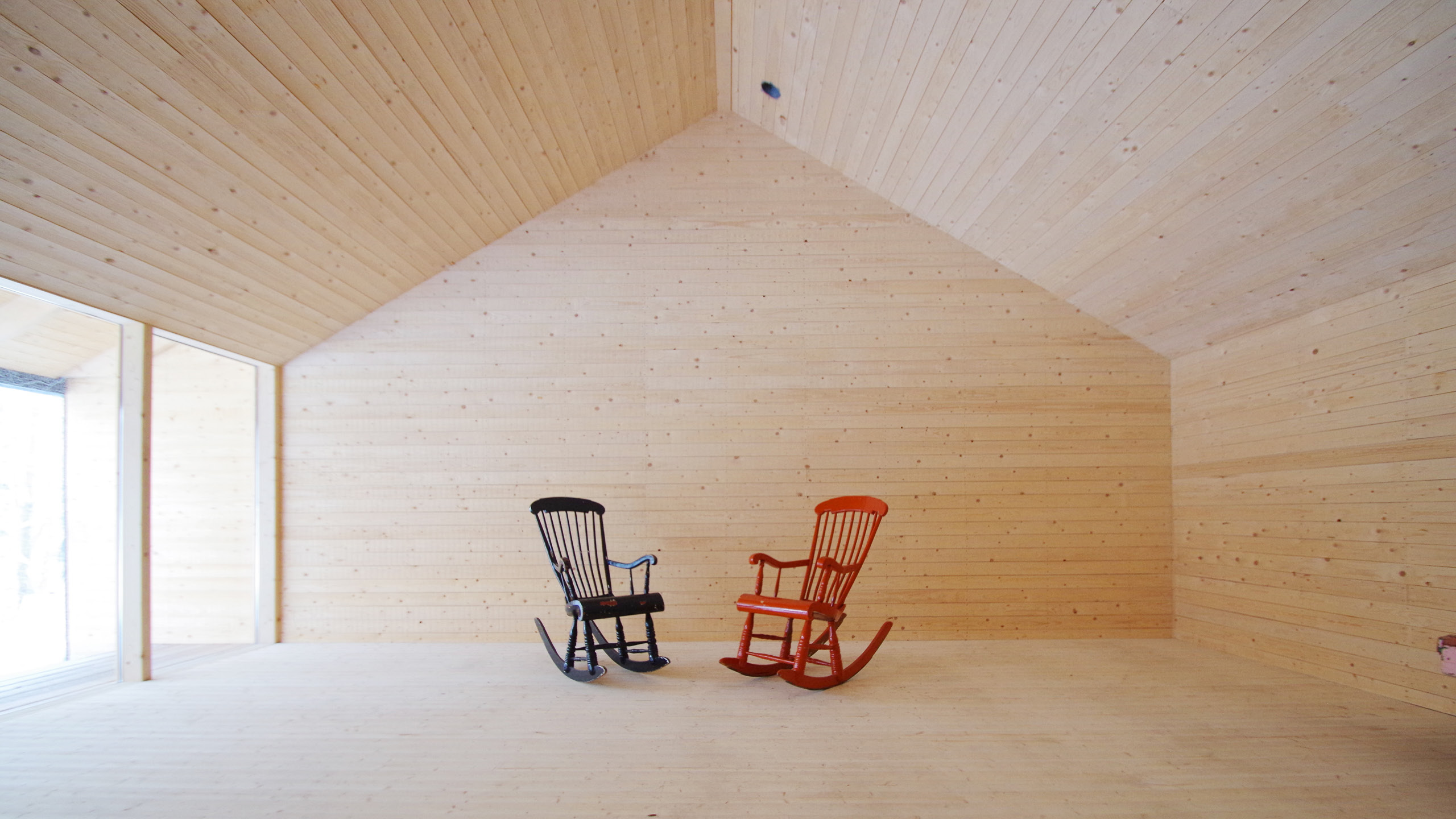 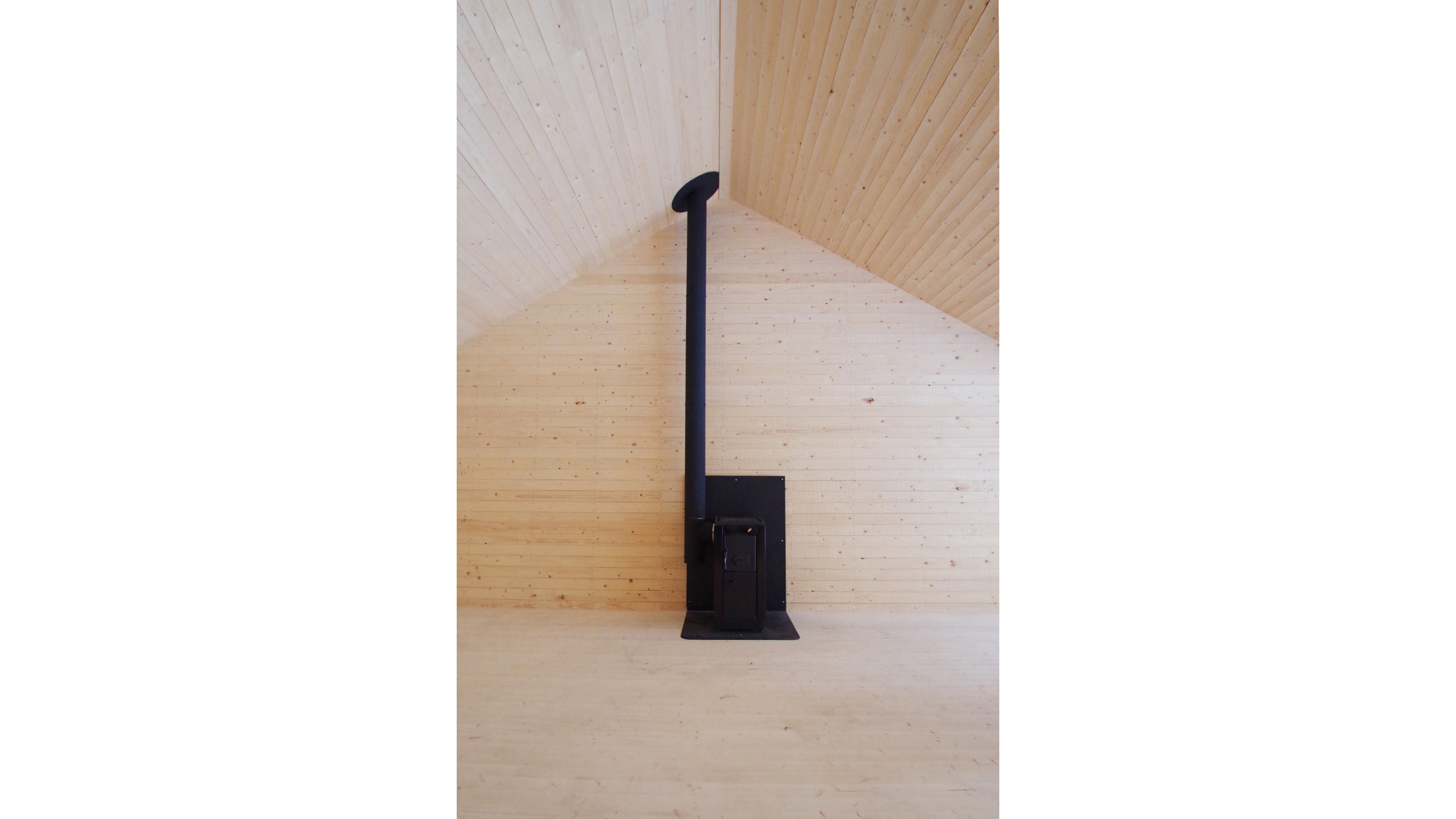 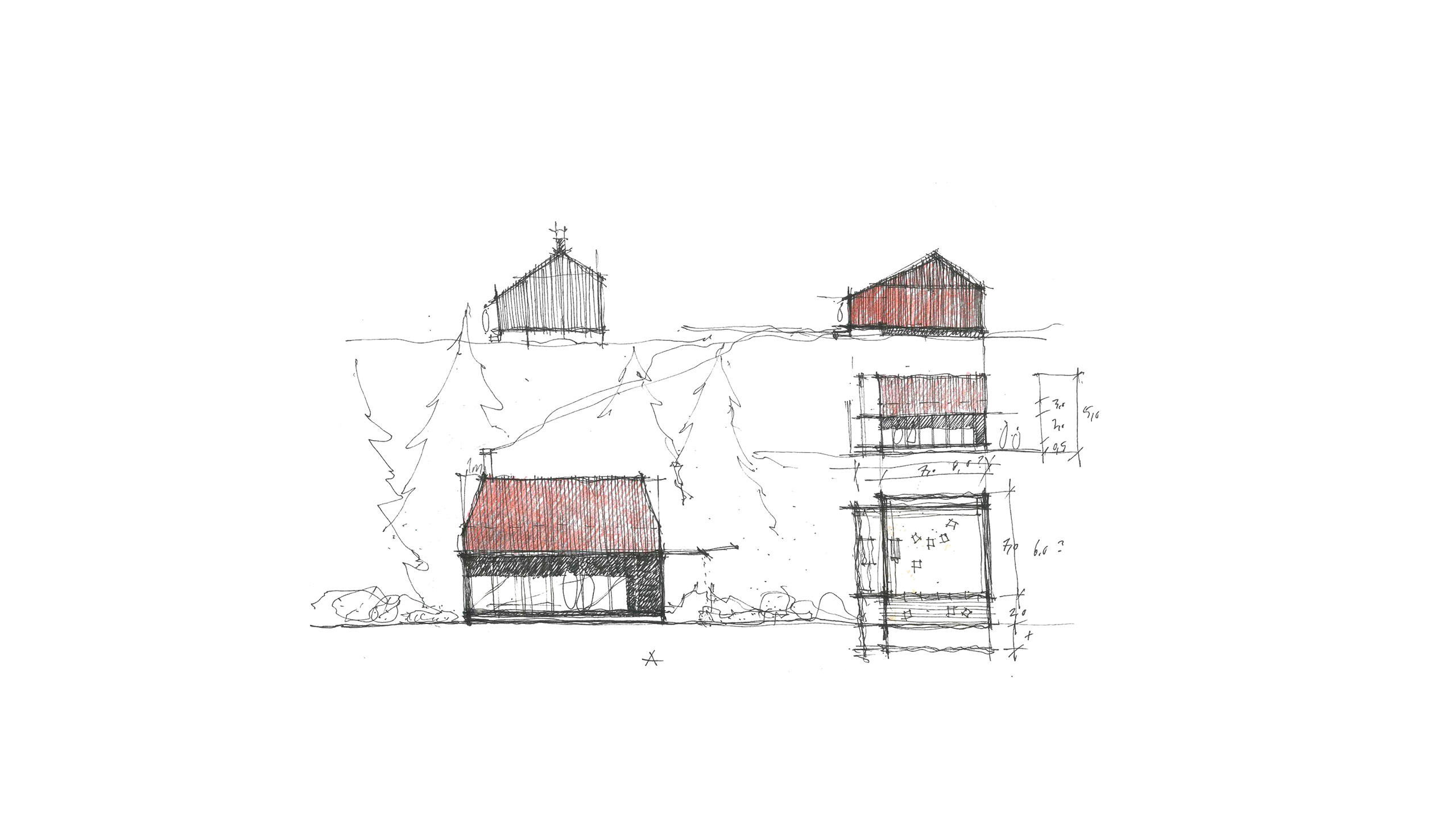 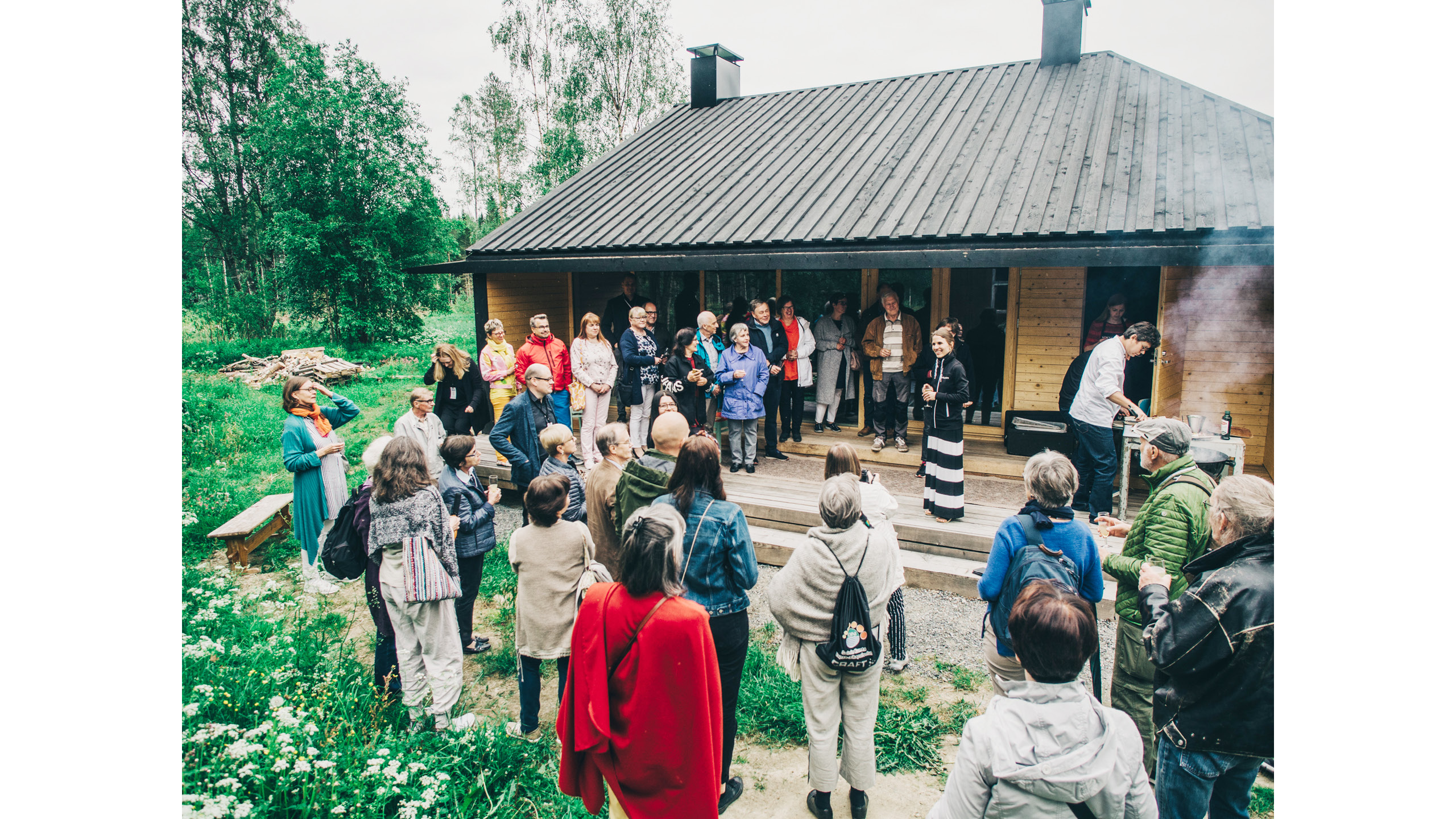 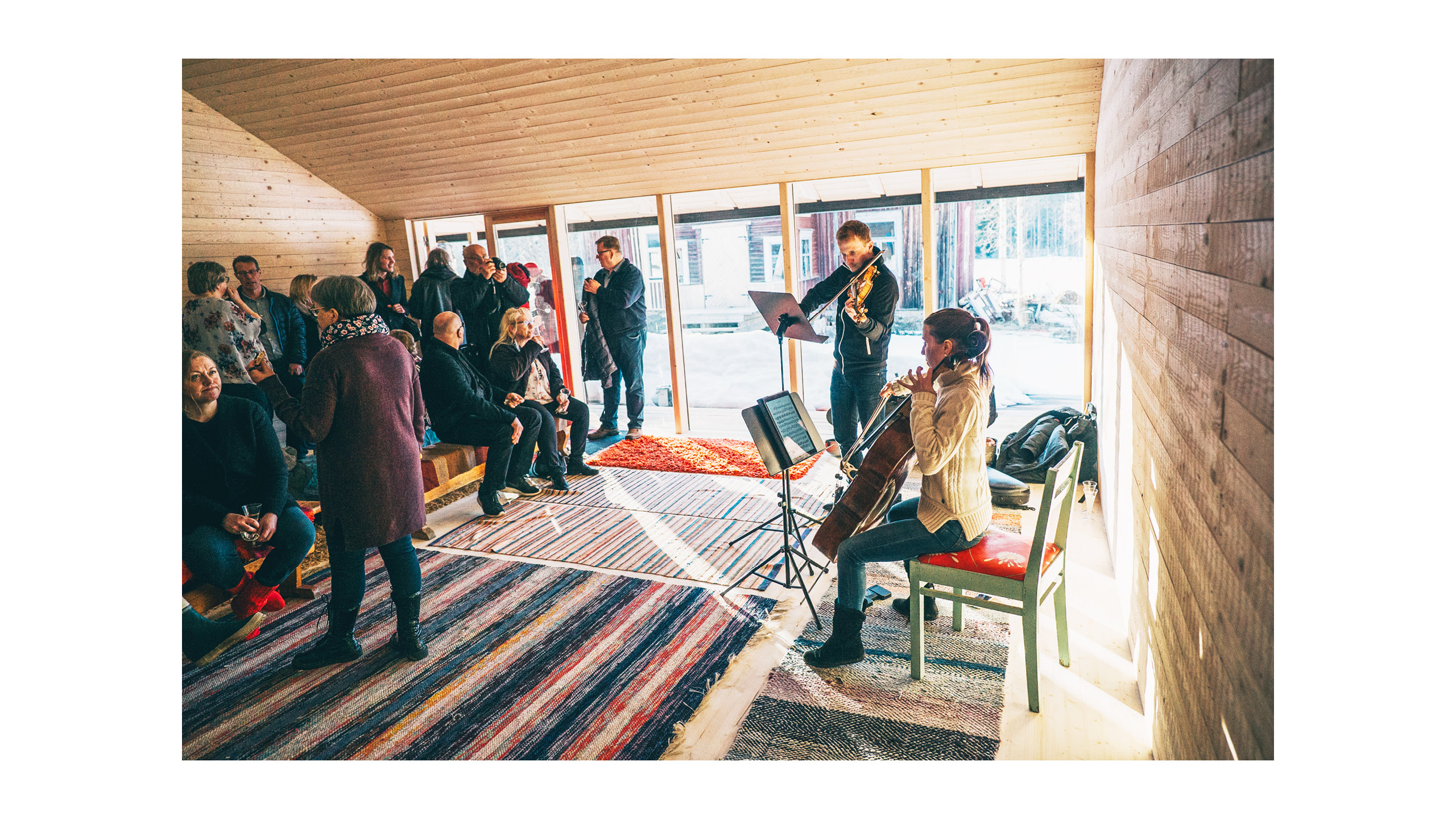 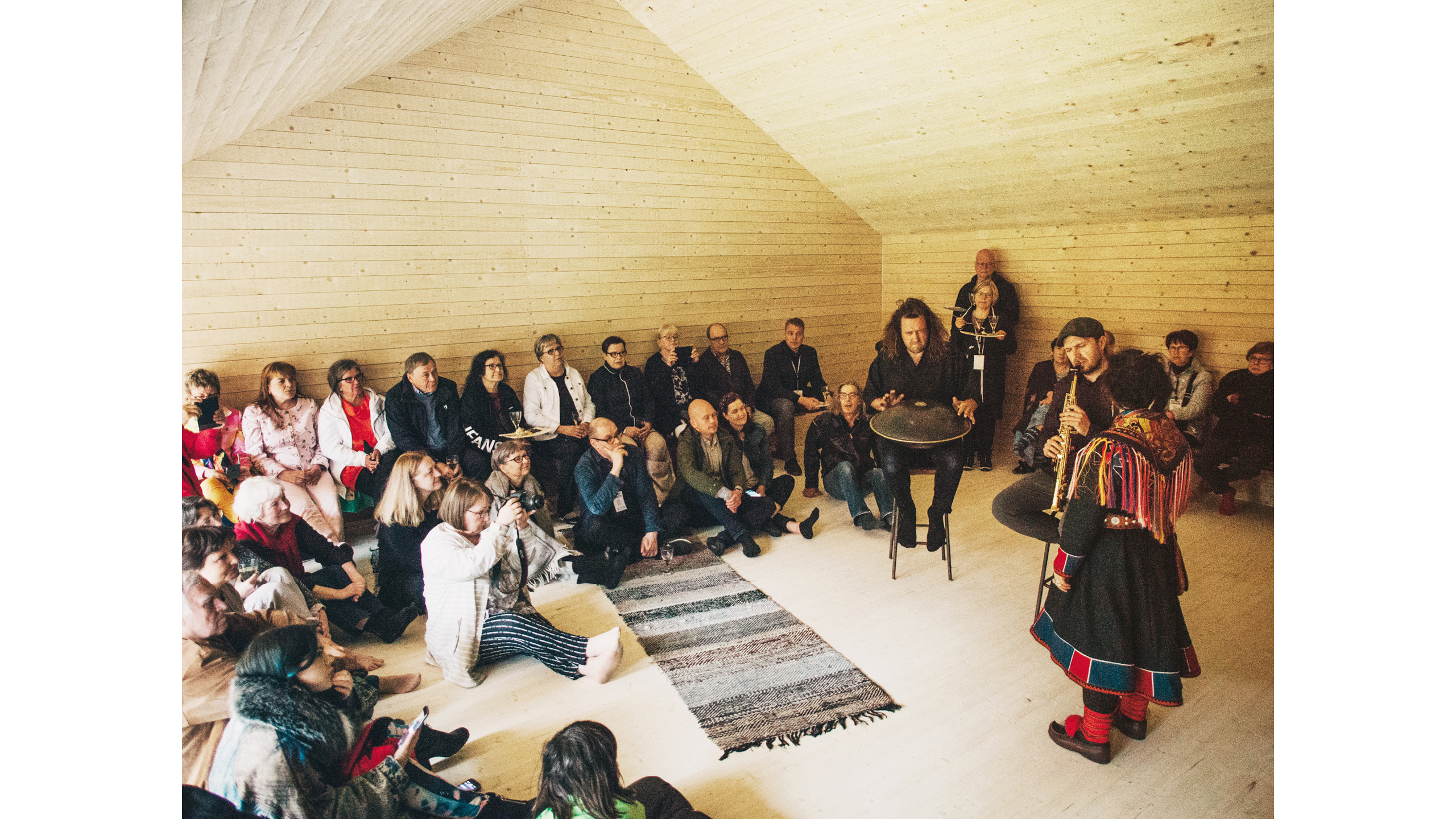 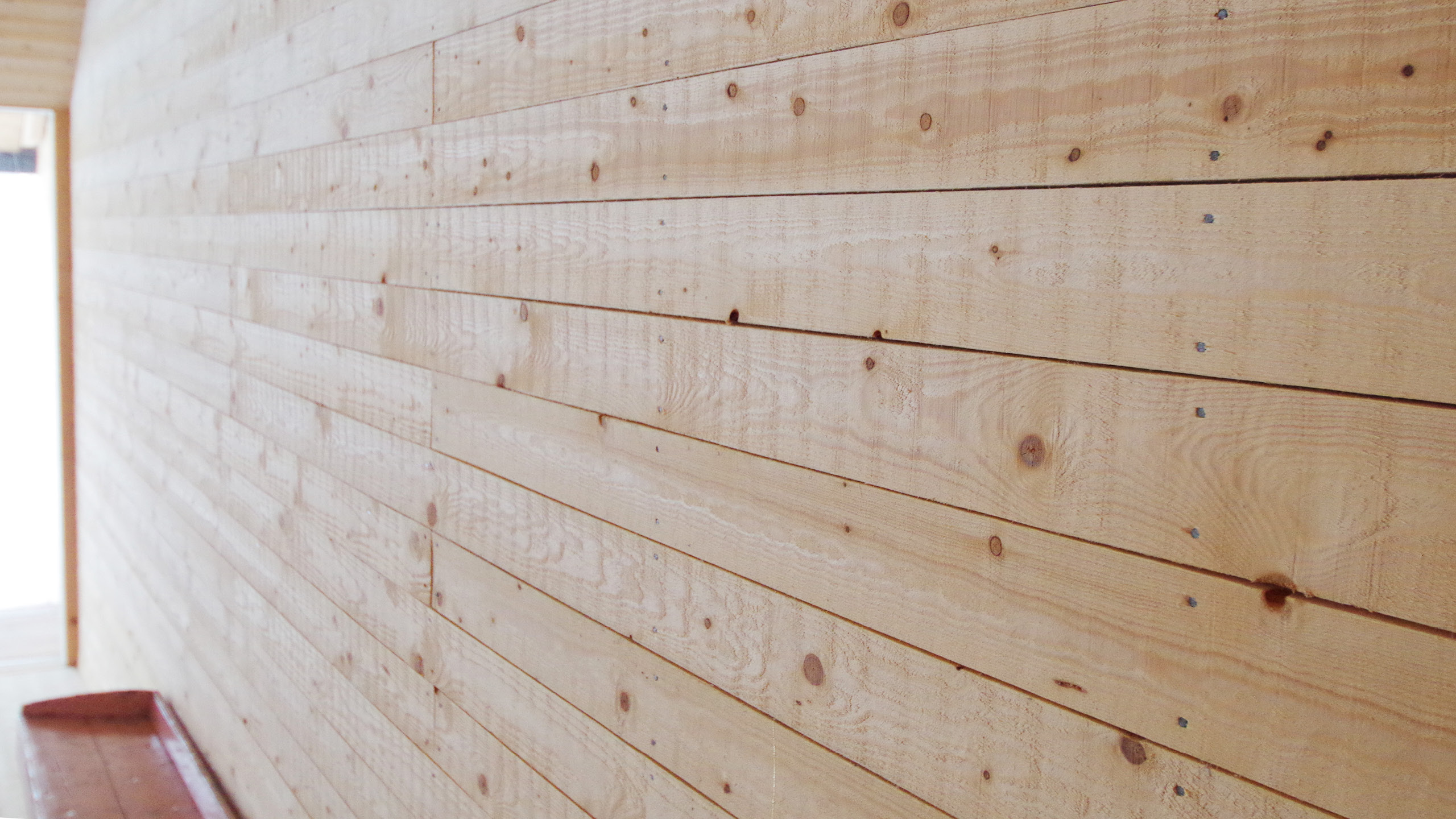 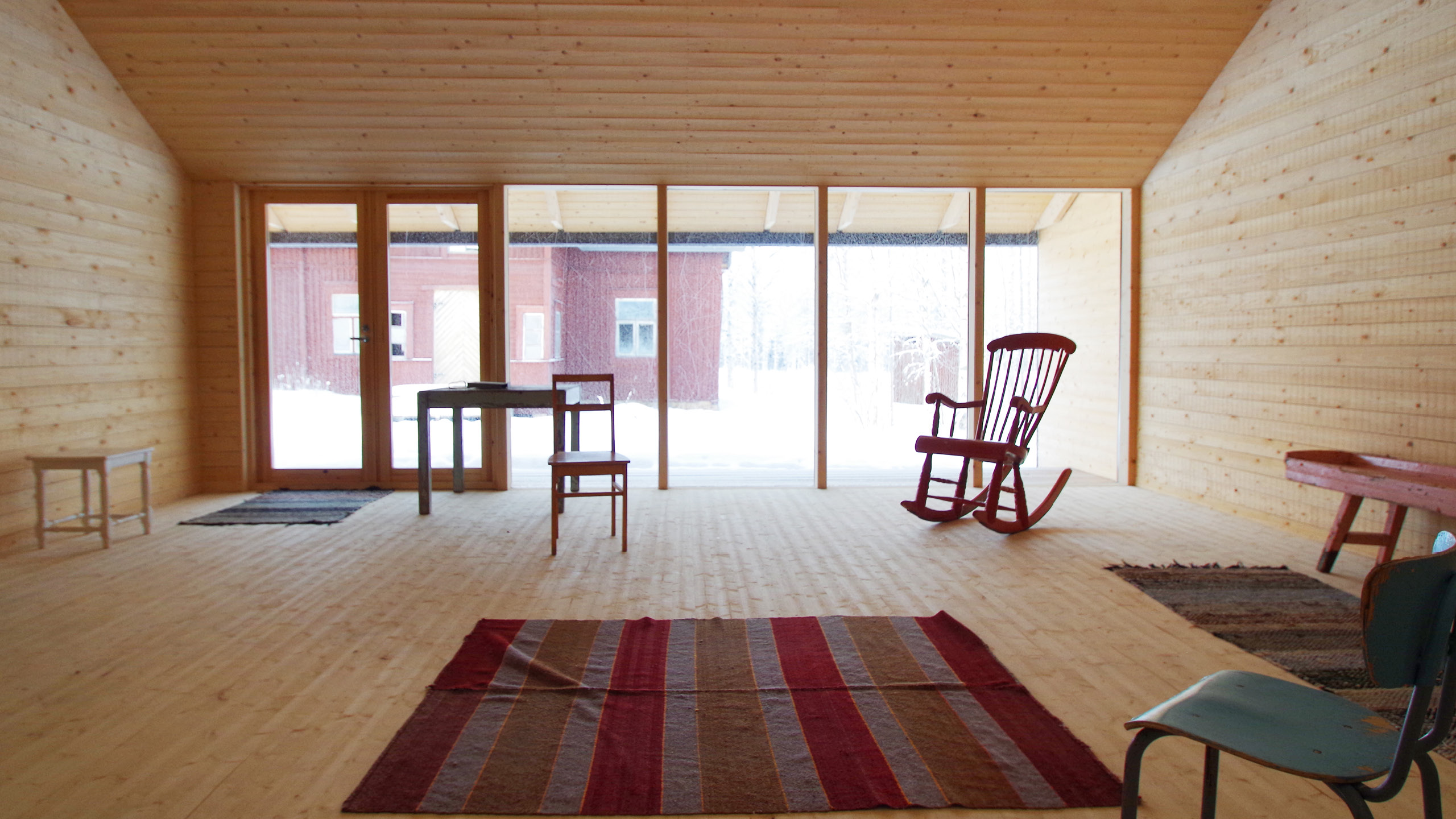 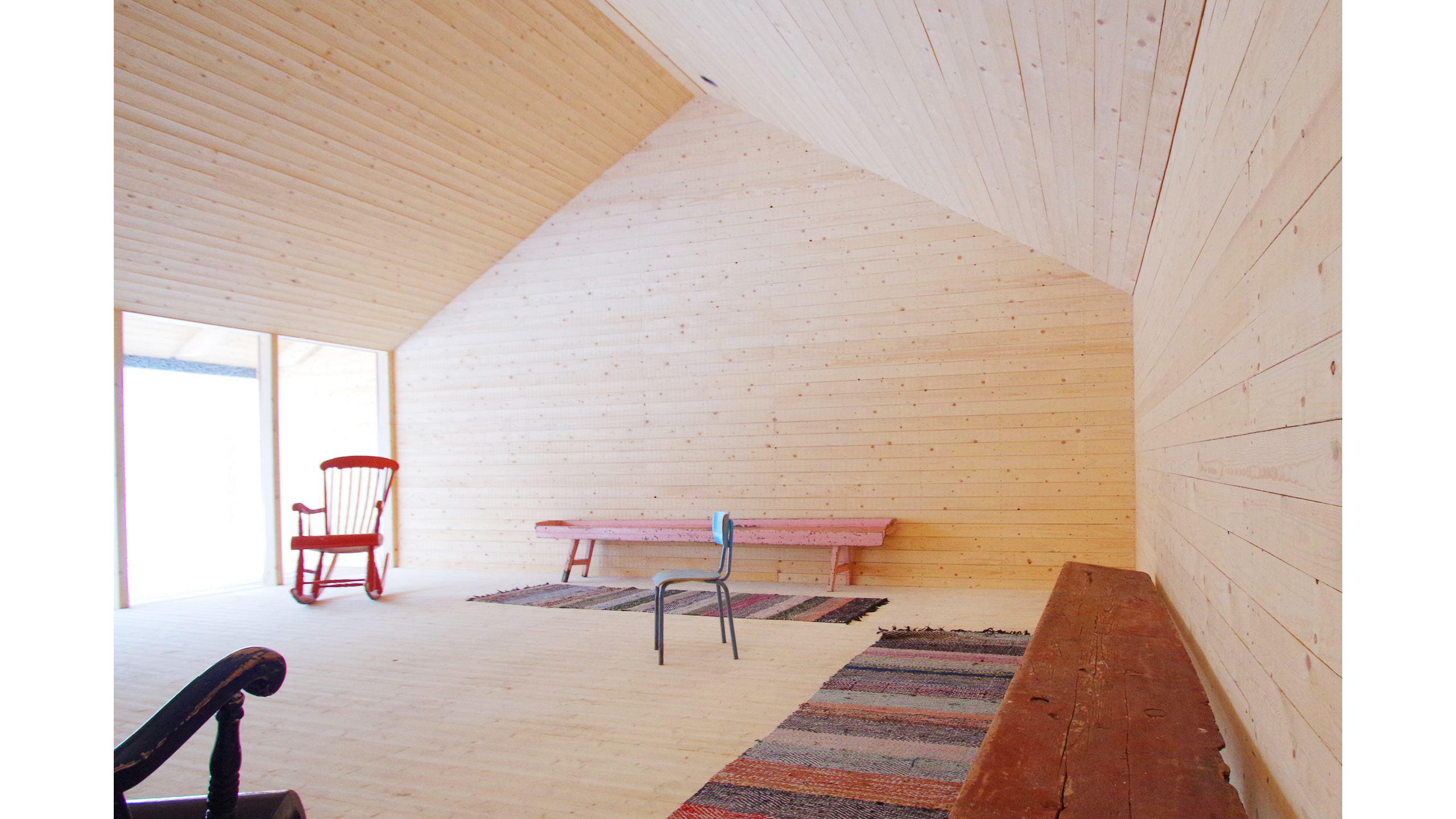 Puuhi is a space for meetings and shared activity for the people of Soini. It was born out of the initiative of the villagers and carried out through active engagement of the community of Soini. Kyläpääskyt, an association founded by the local community had already acquired a piece of land when they contacted Anssi Lassila, a native of Soini himself, to tell him about the idea of creating a space that would suit a varied range of activities from gatherings to performances of music, theater and art. It was a small farm with some fields and a little bit of forest land around it near the Lake Iiroo in Soini, in the Finnish Ostrobothnia. There was a croft from the late 19thcentury as well as a sauna on the lot. The intention was now to build a new building to complement the existing buildings in the yard. The plan was to use local materials and draw from local skills and resources for the new building, and the people of the community wanted OOPEAA to take on the task of designing it. Their devotion to the project was so strong that it would have been hard to resist. Inspired by the enthusiastic attitude of the villagers, Anssi Lassila finally agreed to take the project on for a very nominal fee.

As part of the project for building a new house for the community, the old red croft was partially restored with volunteer labor. However, it was not possible to repair the sauna anymore, and the new Puuhi building was built in its place. The dark, sculpted shape of the new Puuhi building stands in stark contrast to the old red croft. The form language of Puuhi draws from the local tradition of building that is characterized by a sense of modesty and pride.

In the design process, only hand drawn sketches were made in addition to the legal drawings required for acquiring the building permit. From start to finish, the design evolved organically through a series of discussions between the architect and a skilled local builder, Aki Alatalo. Together they sat down to find the best structural solutions for the flooring and the walls, and the finer details were honed either on site or sitting around the coffee table in between mountain biking treks.

The entire project was realized with a very small budget and a lot of the materials used were received as donations and recycled from local sources. For example, the stones used for the foundation are recycled from a burnt down school in the nearby Hautakylä village, and the stairs of the terrace are made of larch trees felled from the yard of the old vicarage saved from being turned into firewood and donated to the project by the architect himself.

The design and building phase of the project proceeded in stages over a two-year span adjusting to the rhythm of the seasons. As the design progressed, it was flexibly modified in response to the arising needs and in accordance to the availability of materials. For example, in the original plan the foundation was to be a traditional one fully made of trimmed stone. However, as it turned out to be difficult to find the necessary amount of stones of appropriate quality, the plan was altered so that only the visible part of the foundation above the ground is of stone while the part underneath the building is made of concrete. This solution proved to work very well in accommodating the need for ventilation under the wooden building.

The walls, the flooring and the beams for the roof were prefabricated in the builder’s workshop in Hautakylä and stored there to wait for transfer and installation. This made it possible to realize the installation on site quickly in good weather during a period with no rain.

The wooden surfaces of the building have deliberately been left untreated and the texture of the spruce planks sawn by hand has been left visible in the interior walls. A light layer of anti-molding agent was used in the wall boarding and the floor was rubbed with tall oil soap to keep dirt from sticking to it. The walls, the ceiling and the flooring were insulated with a wood-based insulation. For consistency, the interior walls of the veranda were made of the same hand-sawn spruce planks as the interior walls. The roof, in turn, was covered with the same kind of spruce boarding as the exterior walls, and both were tarred black.

The name of the house, Puuhi, refers both to the word used in the local dialect in the northern Ostrobothnia for a drying barn as well as to the purpose of the building as a place of many activities (puuha = activity). Puuhi is like a large farm shed. To accommodate the many different uses of the building, the interior is realized as one completely open space with no dividing walls. The high ceilings of the wooden building provide for excellent acoustics and suit very well for concerts and performances. The veranda and the yard extend the space available for events. There is also a storage space for storing benches and other supplies.

Puuhi is an off-grid building with no electricity. The wooden house has been designed so that in it can be kept cold in the wintertime when not in use and can then easily be heated with a stove when there are activities there. The large front window on the long wall of the building opens to the yard giving the interior space a lot of light and creating a seamless connection between the interior and the exterior.

Social sustainability was a key principle guiding the design of Puuhi. The goal was to create a building of high architectural quality with local materials and local resources. Even if the building itself is small, it is of great significance to the community. In it, the desire for creating a shared space for the community merges with the view of the architect. The seamless collaboration between the architect, the client and the builder were essential in achieving a successful final result. It was a great pleasure as an architect to be part of such a project initiated by the villagers and created to meet the needs of the community.