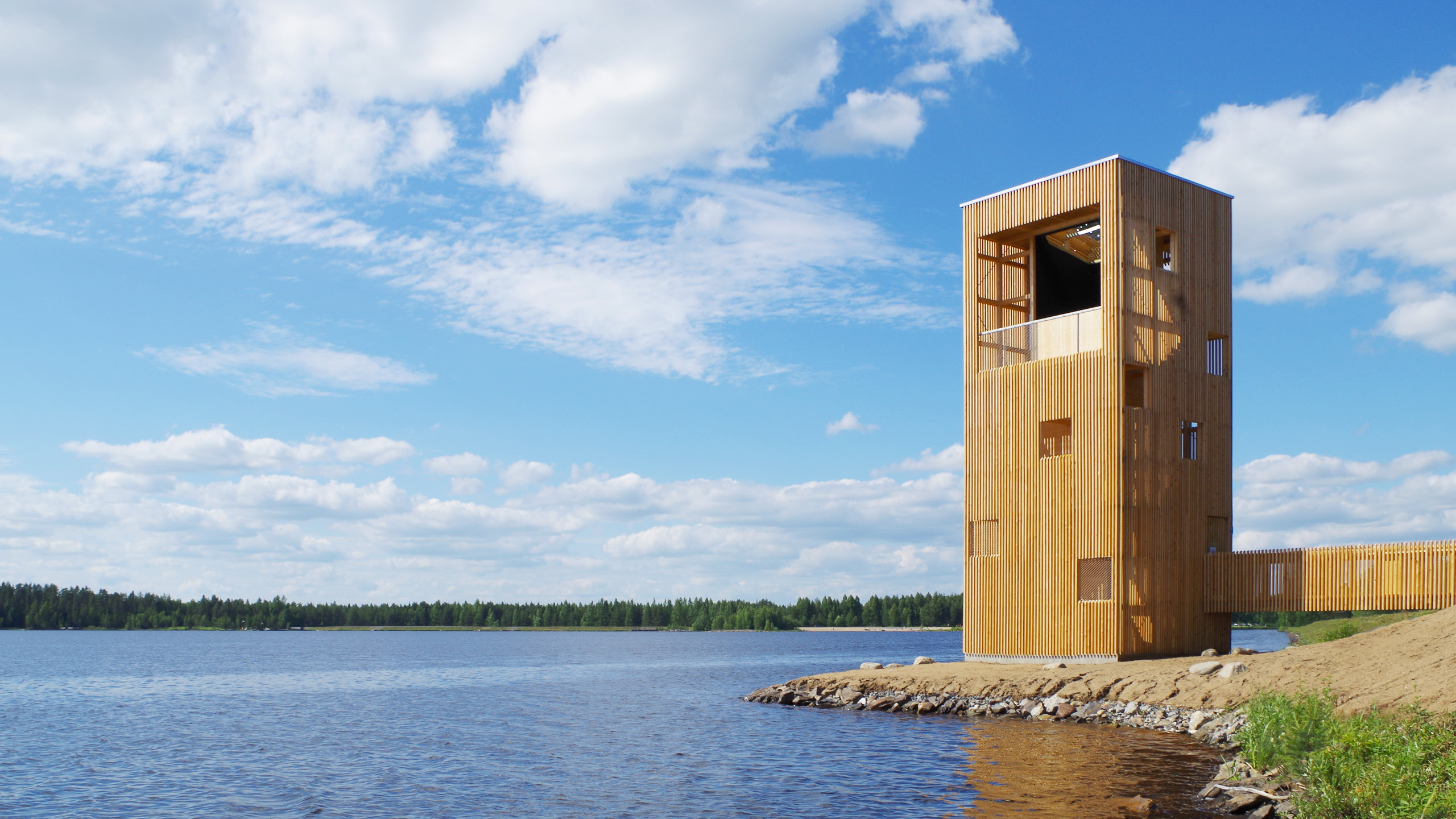 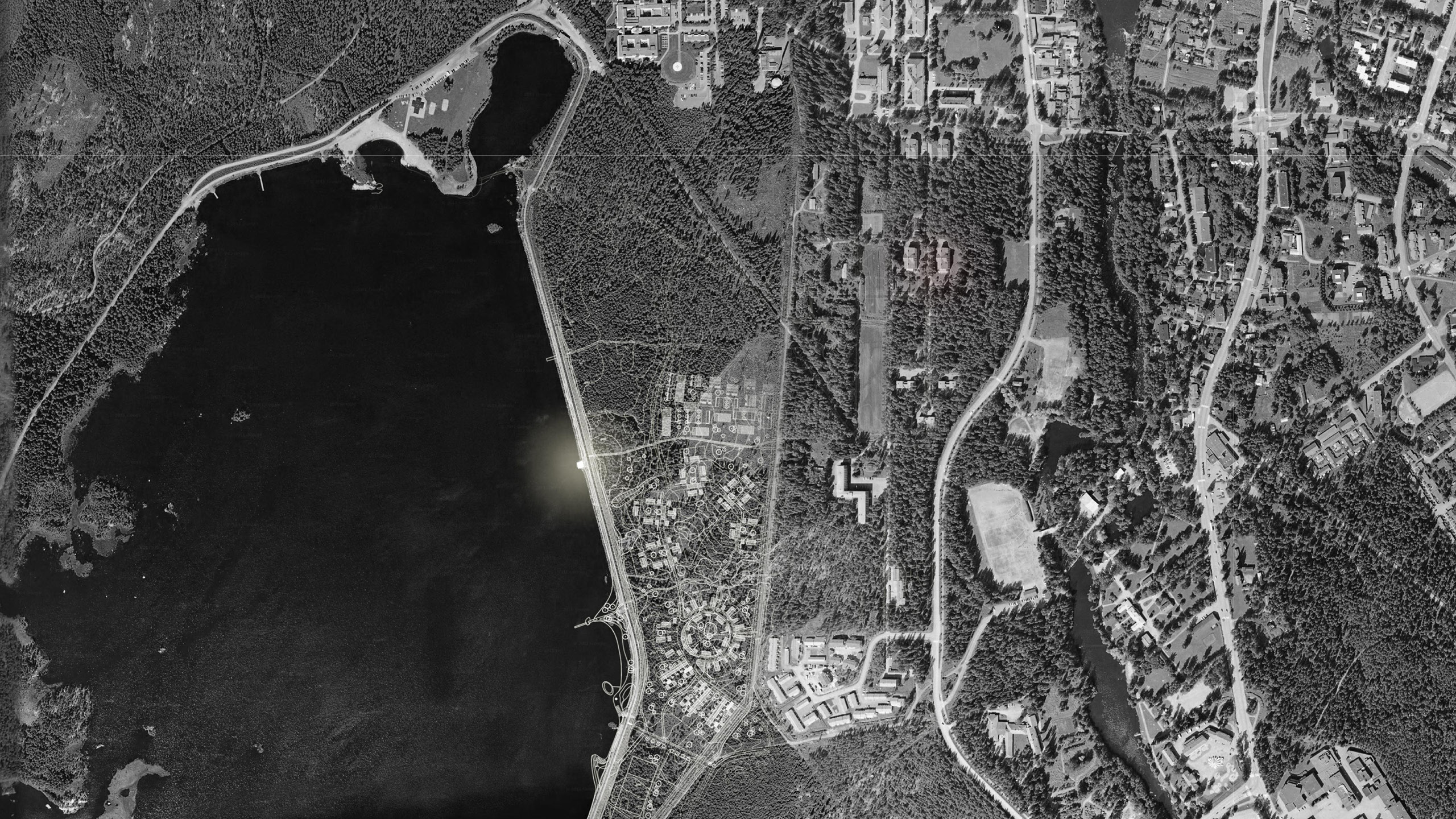 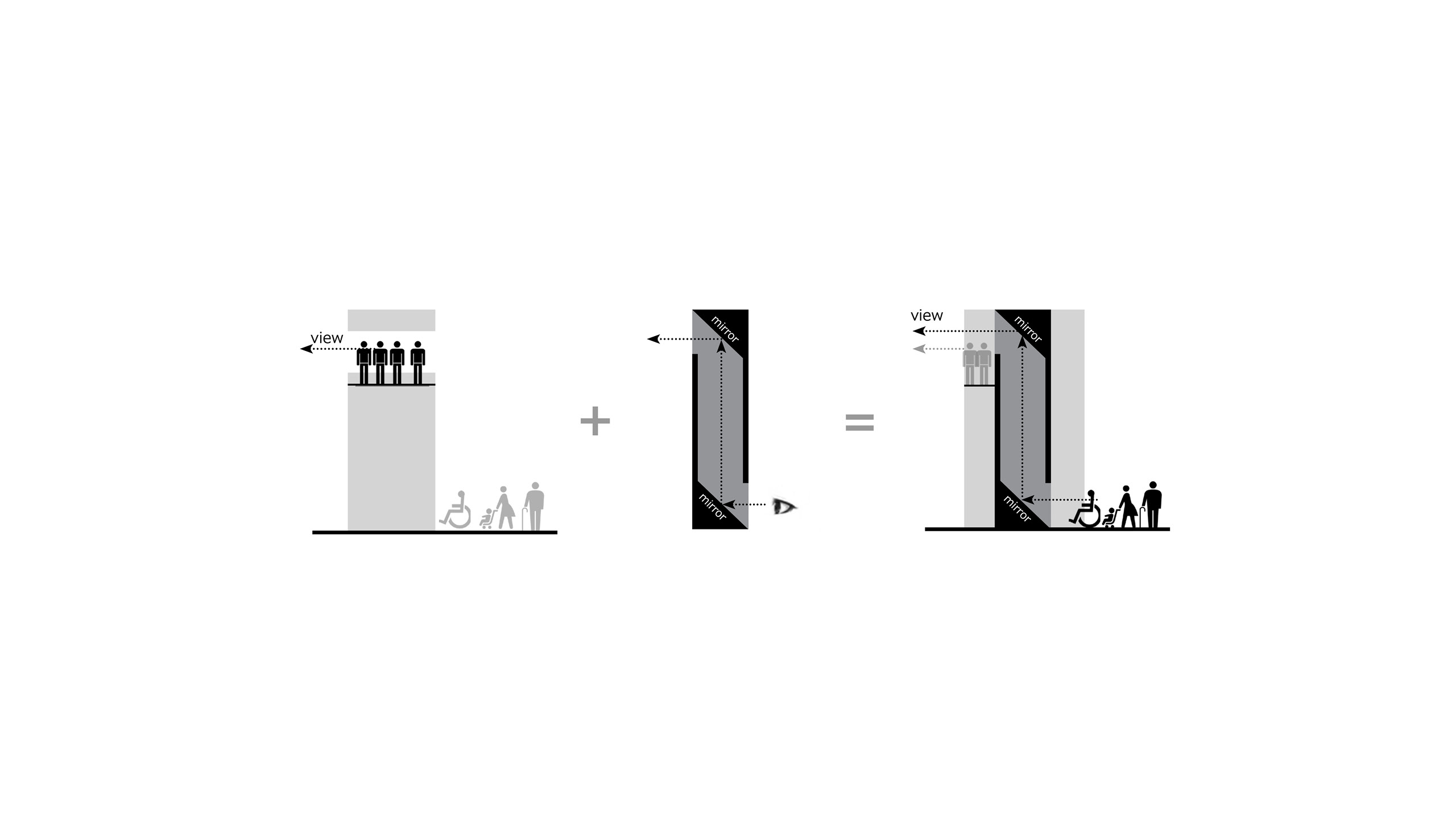 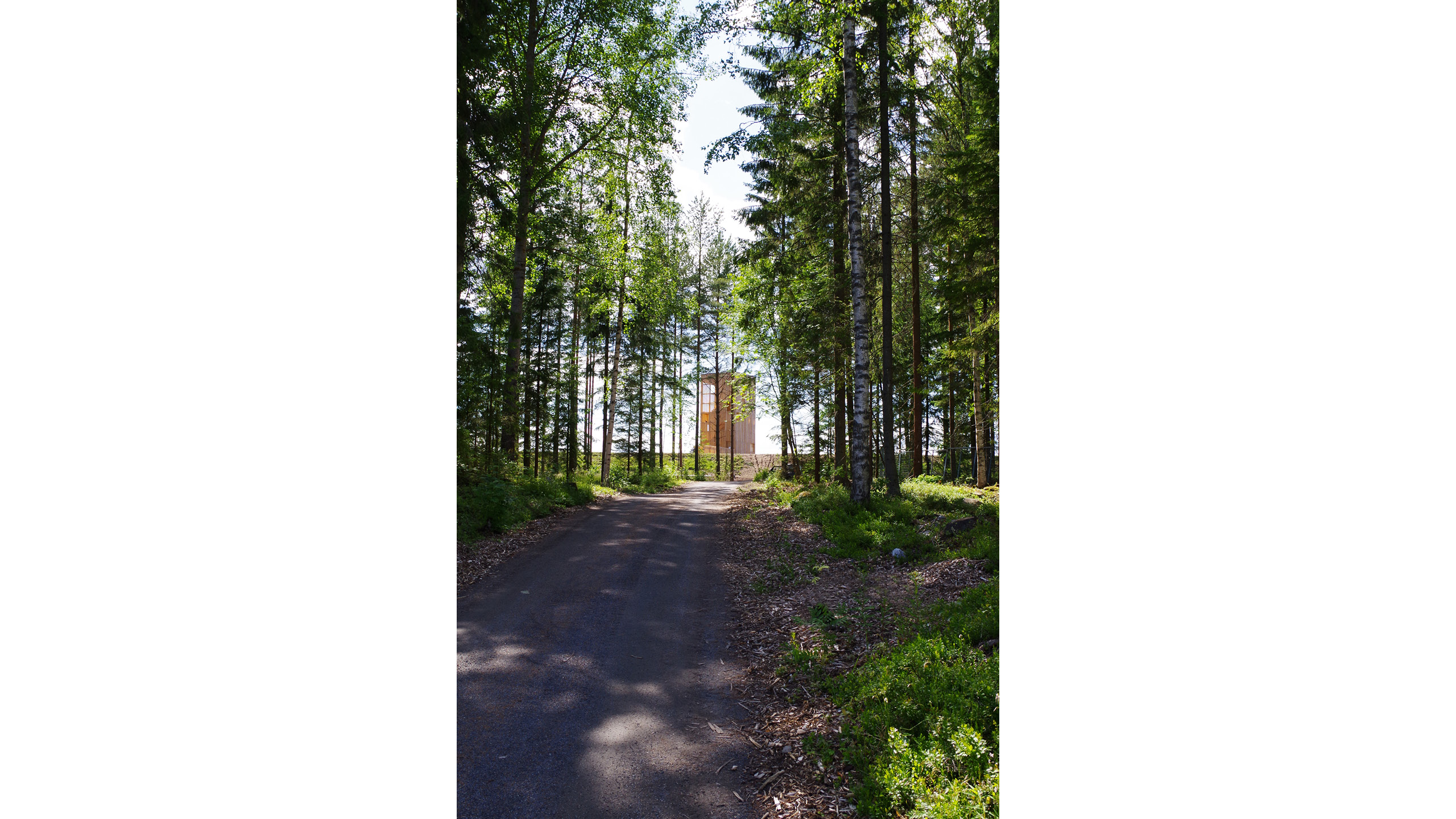 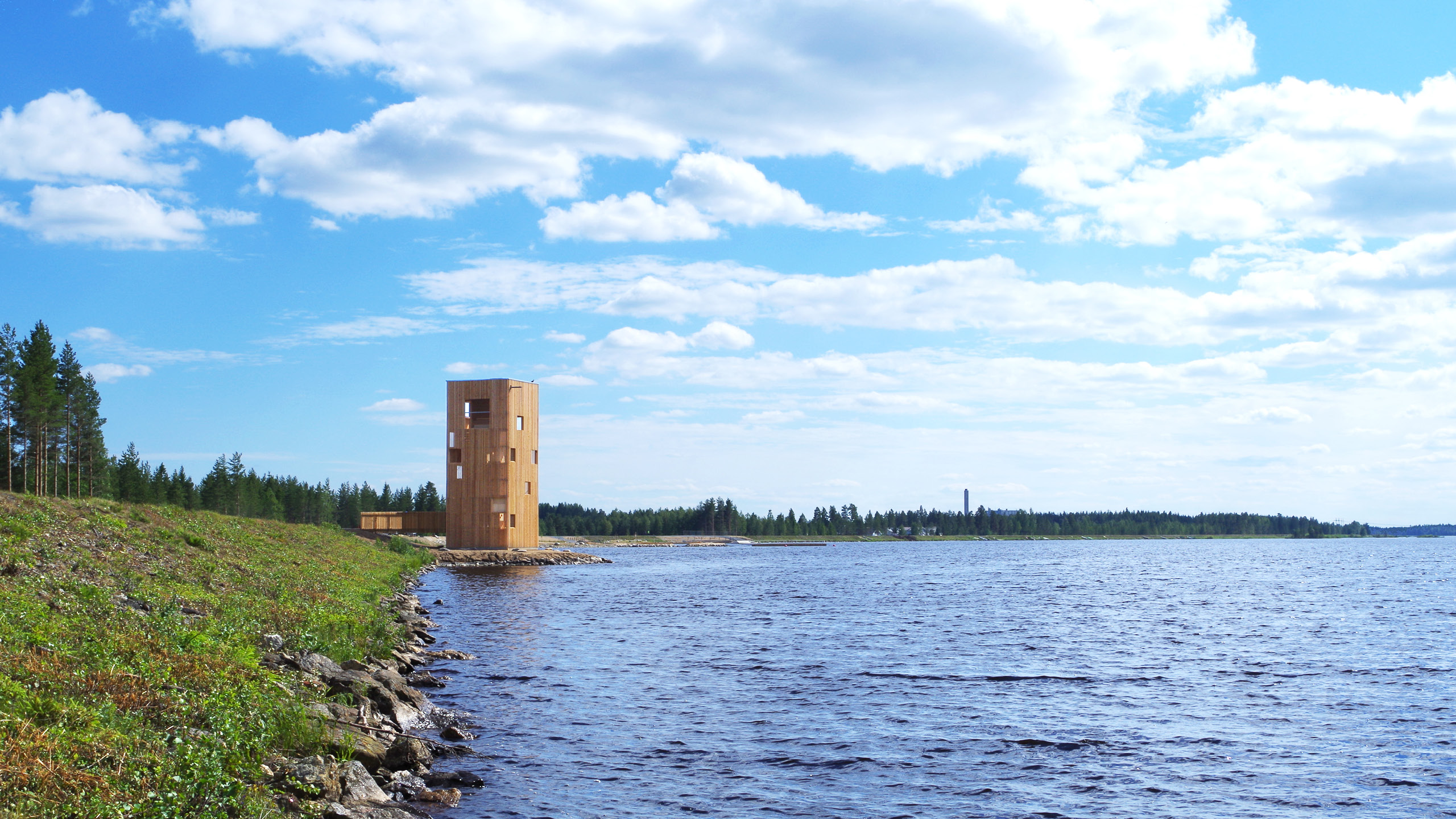 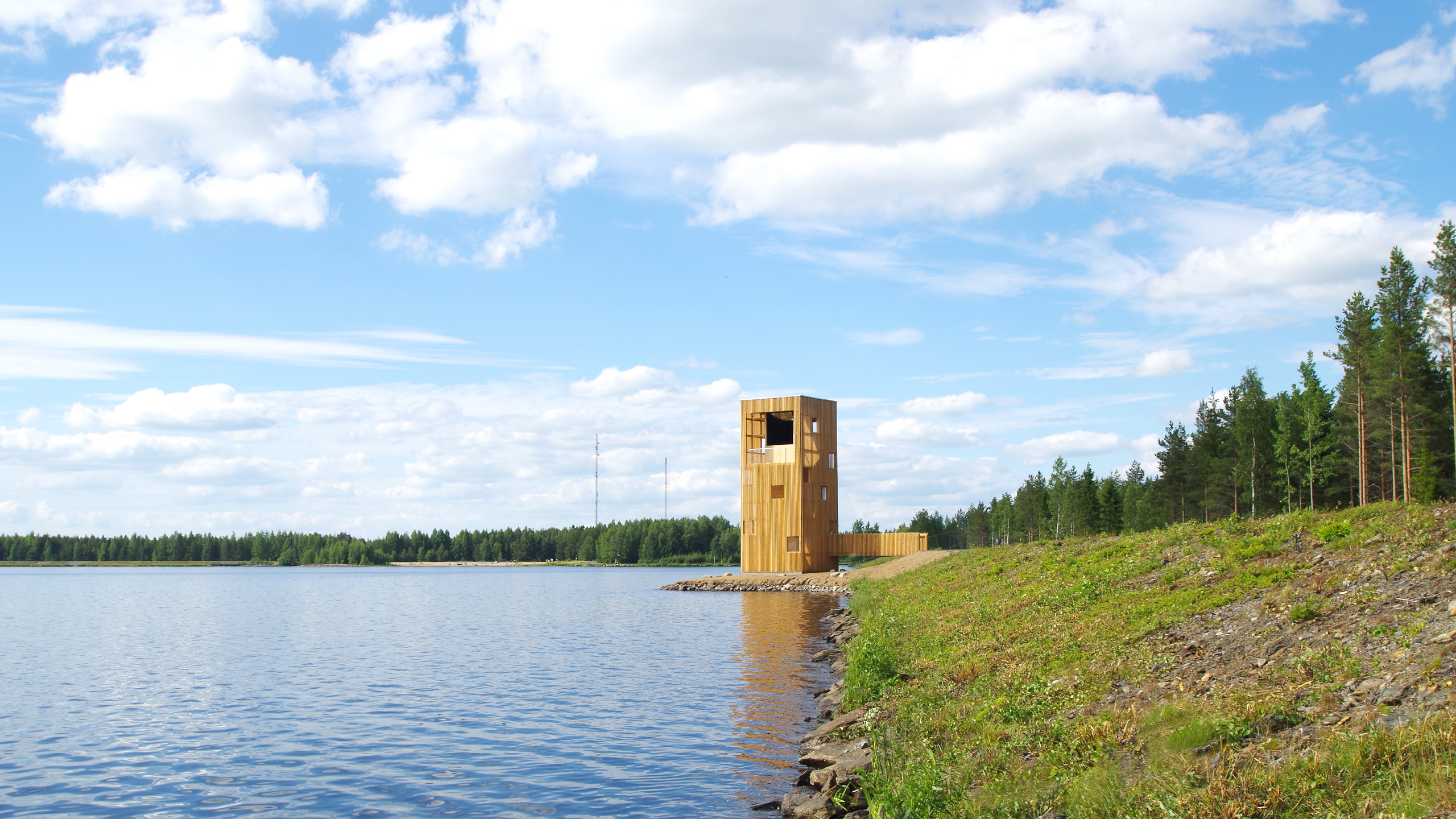 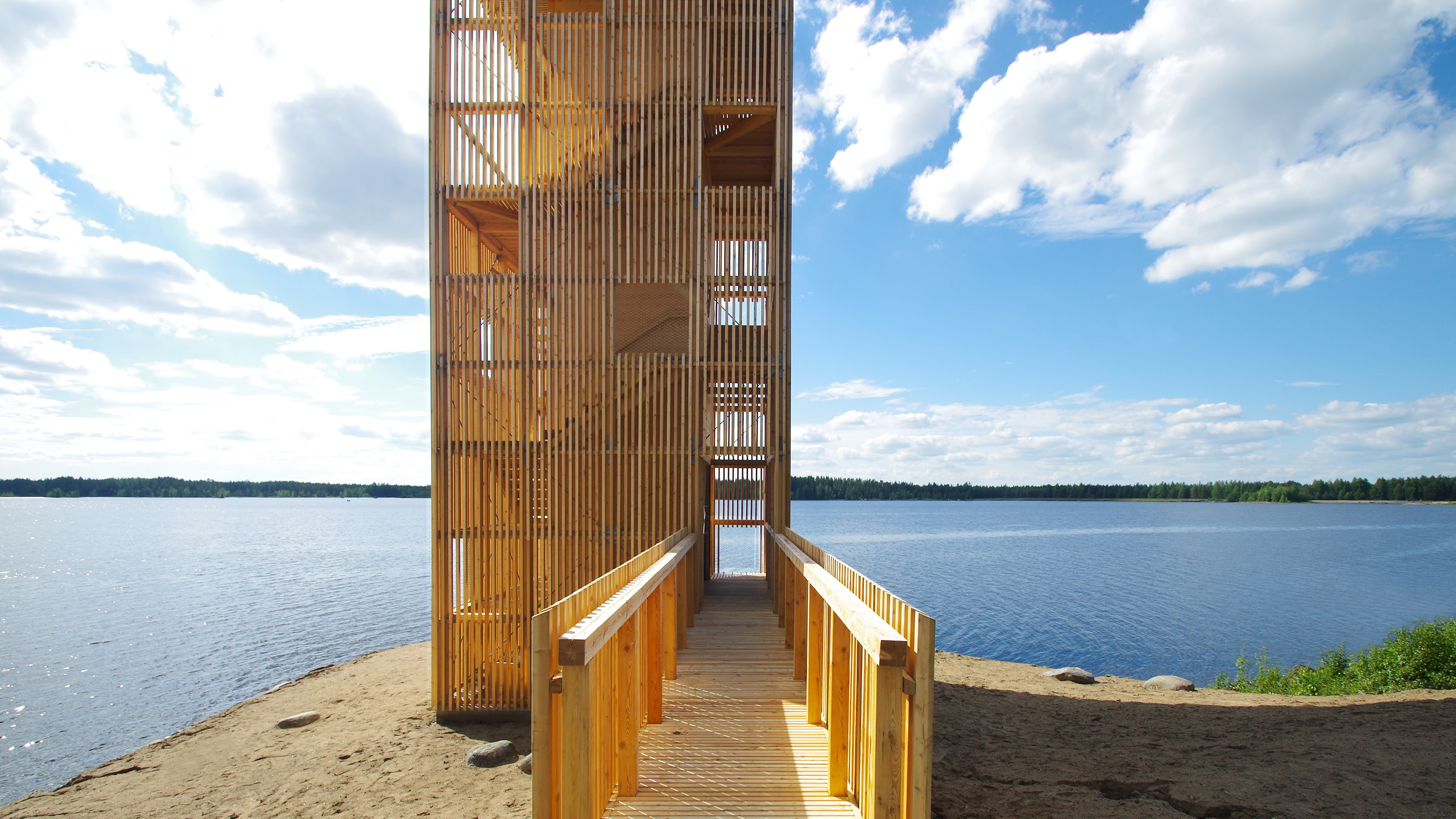 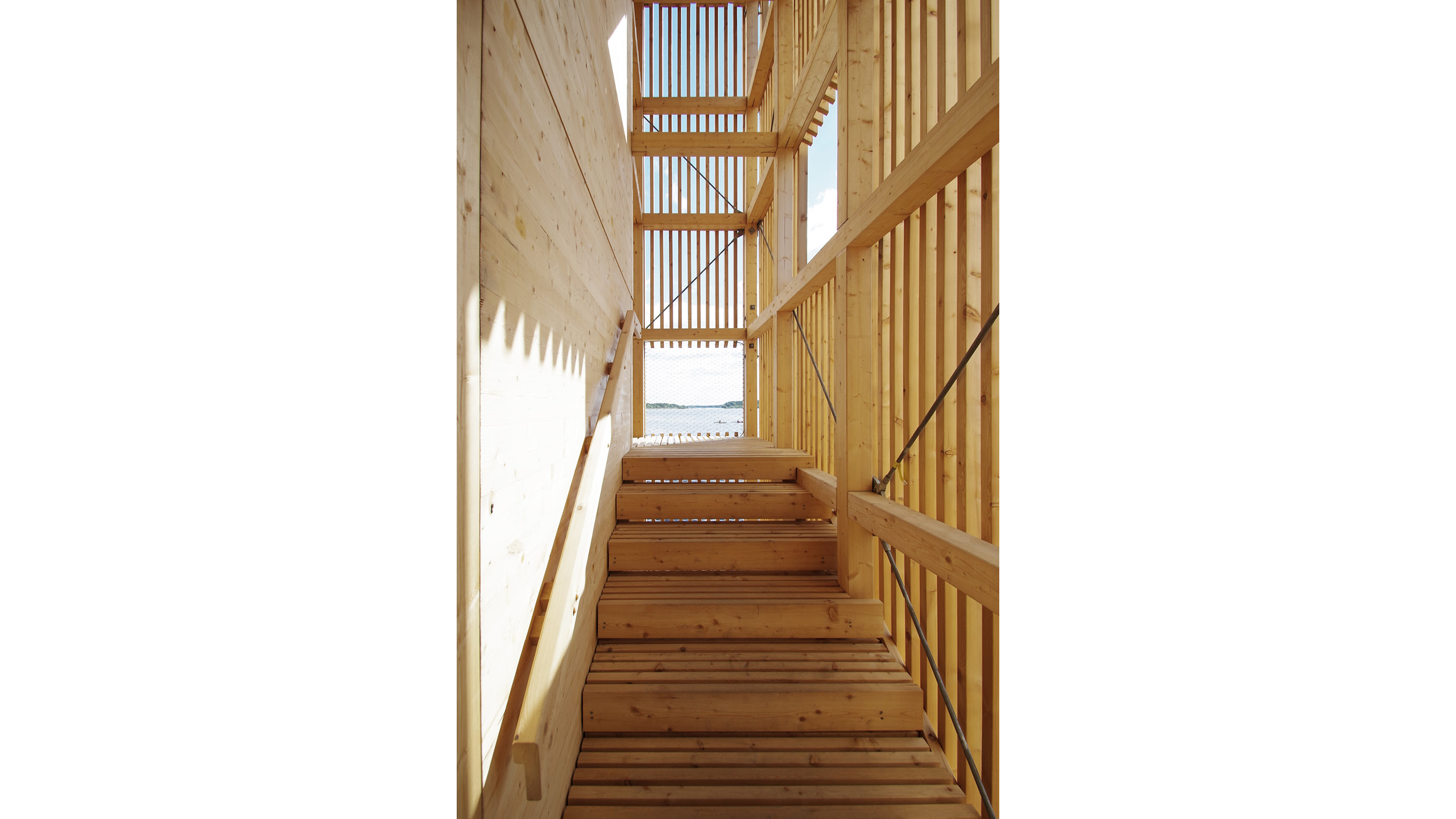 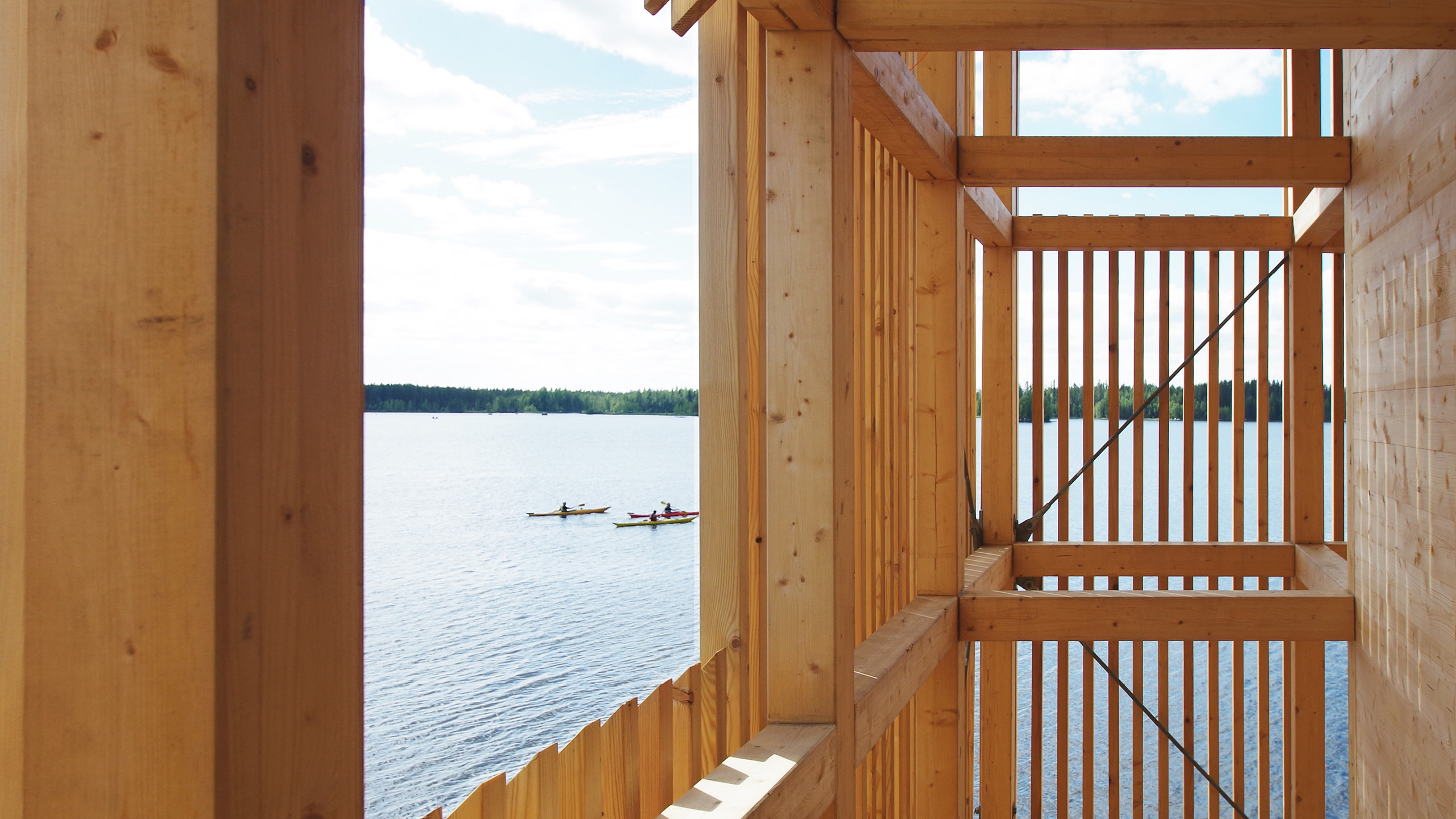 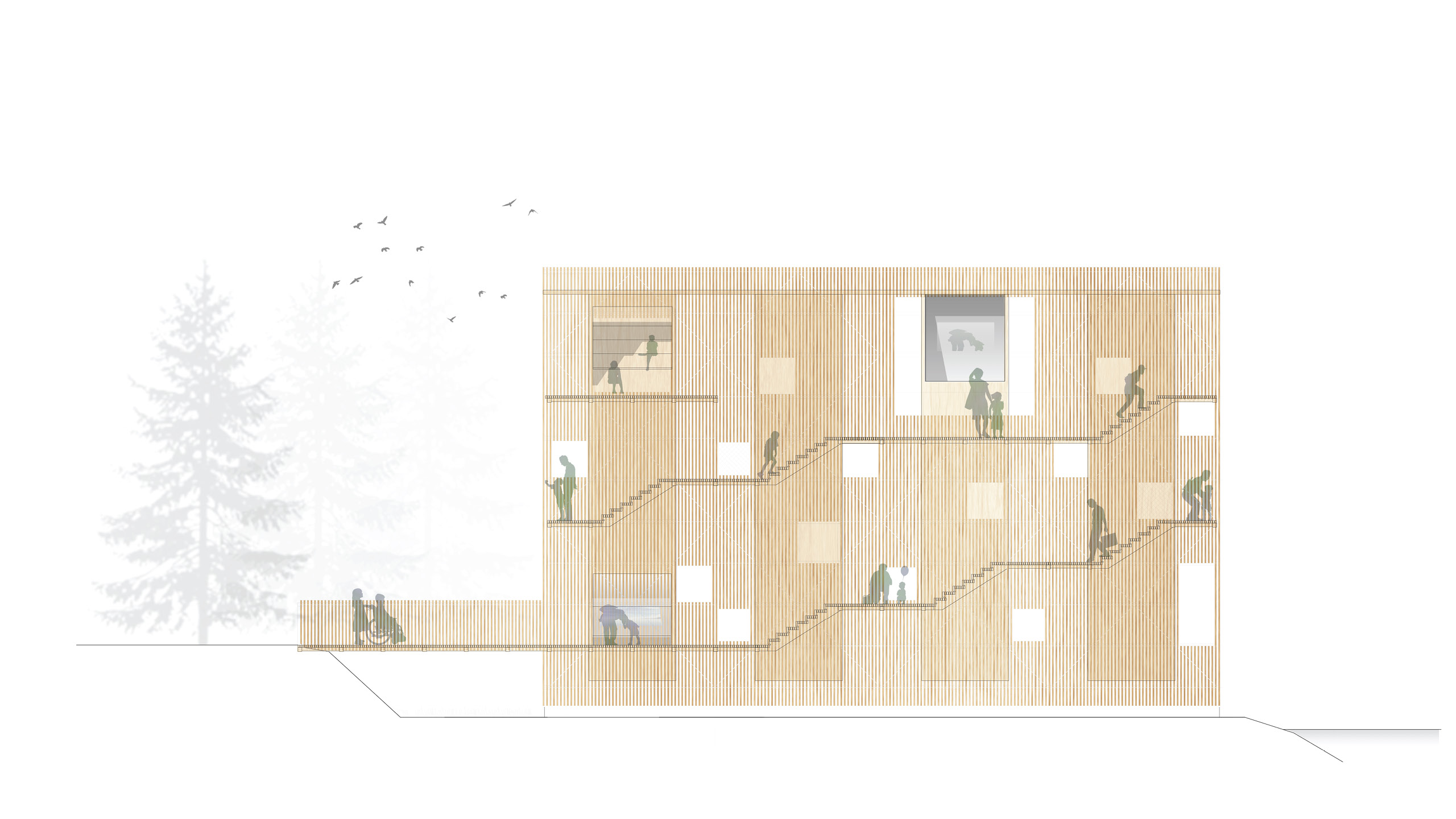 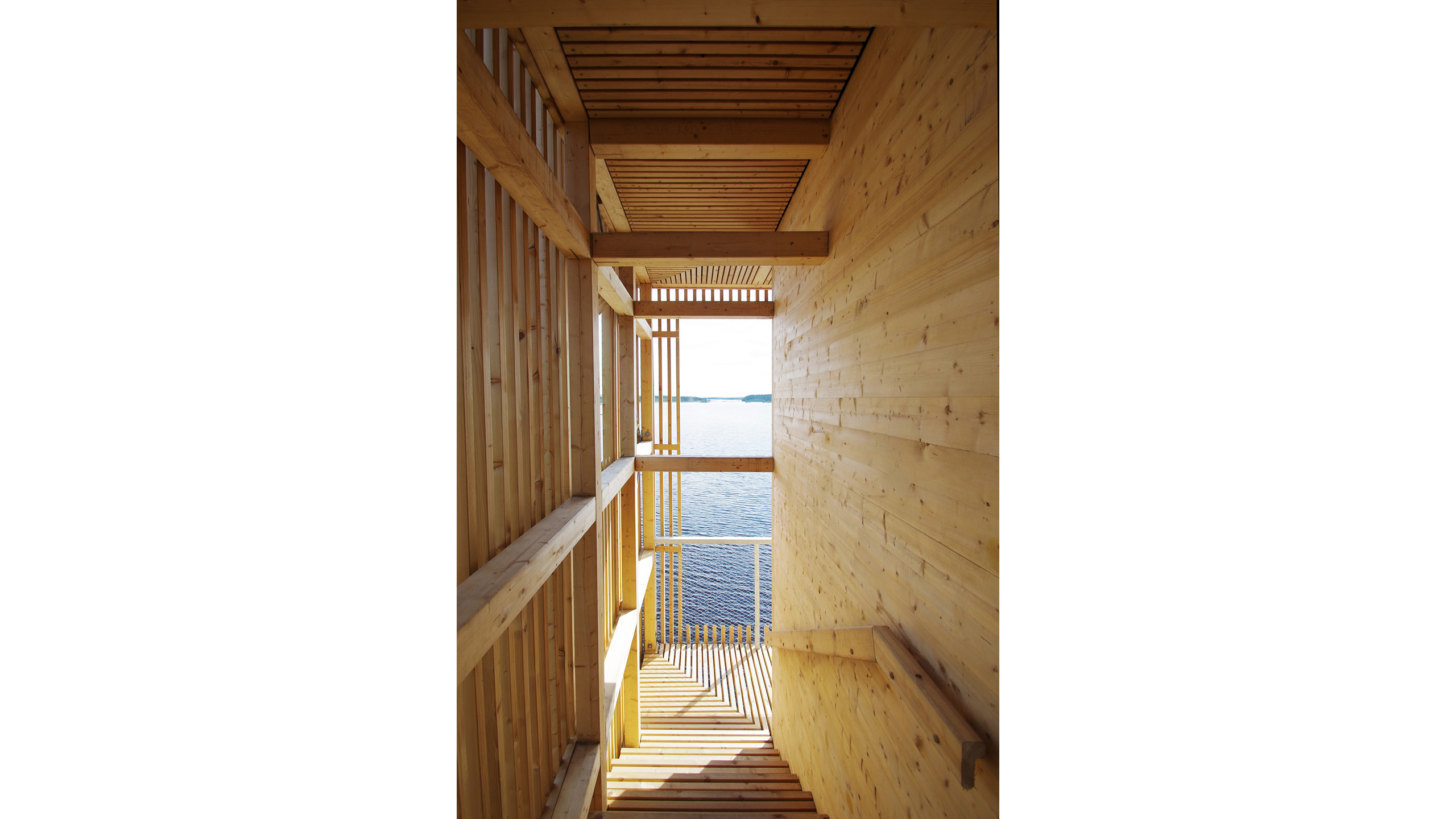 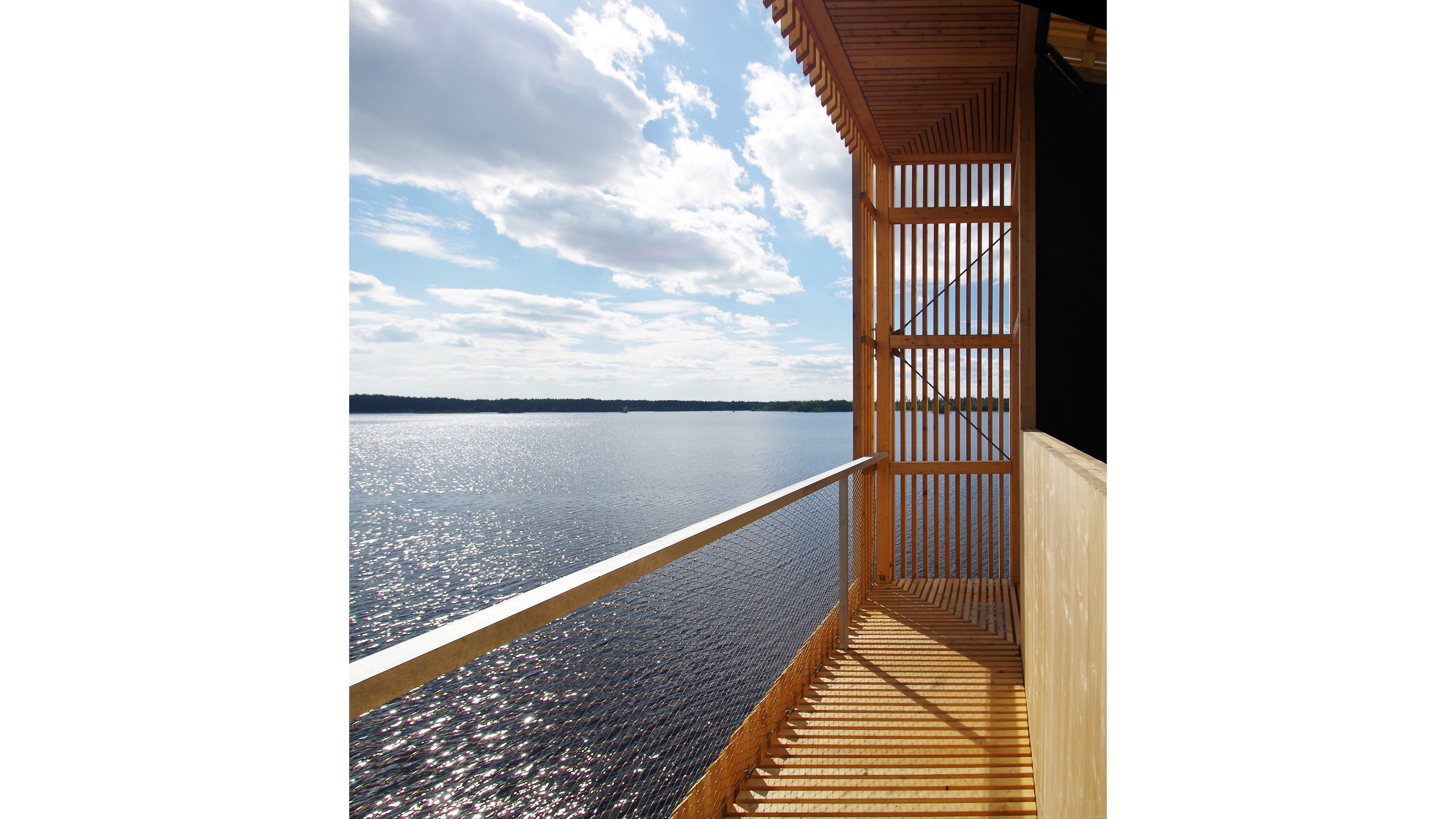 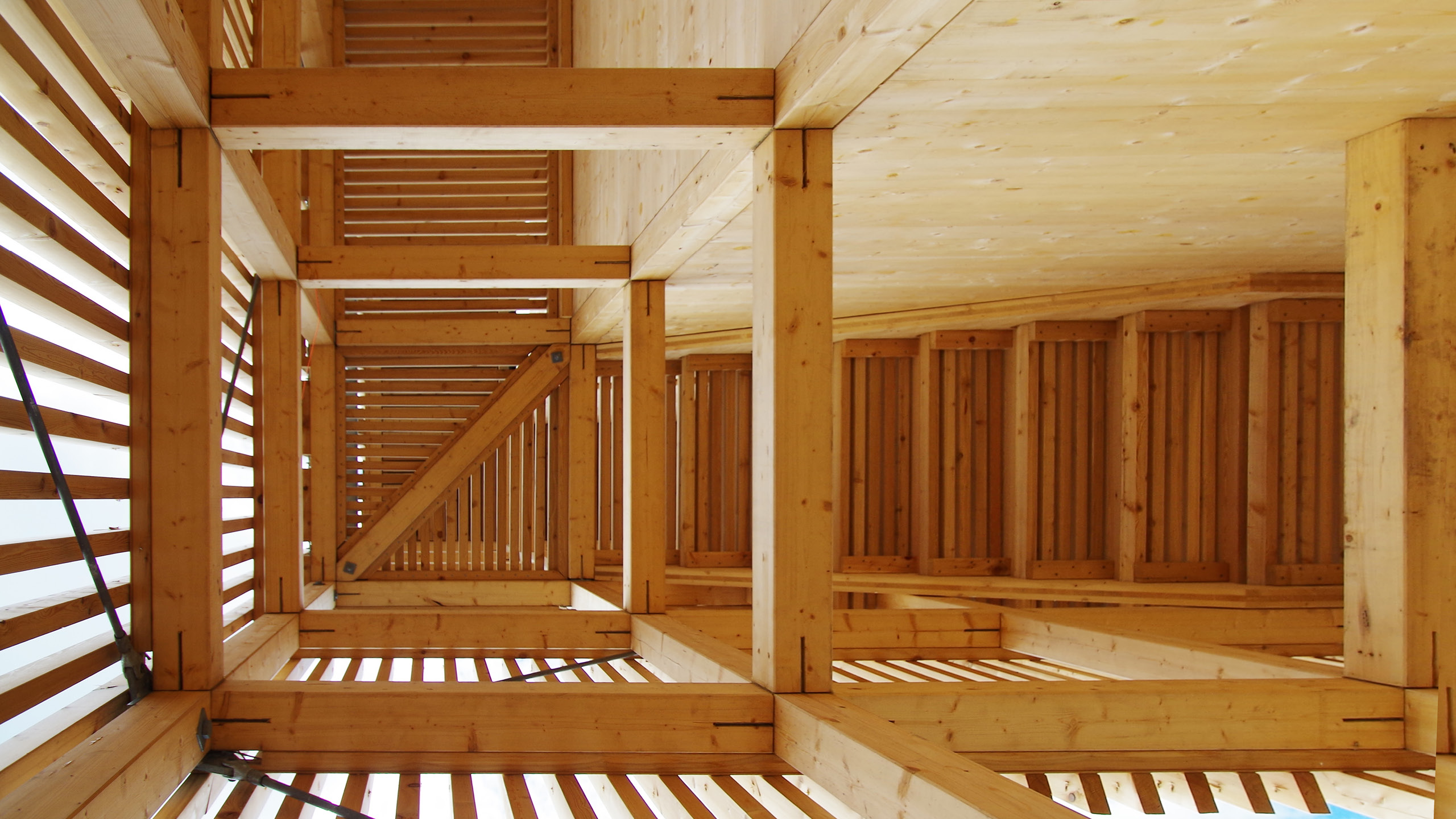 The Periscope Tower is a giant wooden periscope structure that serves as an observation tower and engages the viewer in a dialogue with the landscape. With the help of a large mirror the Periscope Tower makes it possible for everyone to enjoy the views of the surrounding landscape. One can either climb up the stairs to enjoy the view over the lake and into the surrounding landscape from the viewing deck, or simply stay on the ground and get the view through the periscope mirror.
Made entirely of wood, the building is composed of an inner core of cross-laminated timber (CLT) and an external wooden frame that serves as a load bearing structure. The inner core made of CLT forms the frame for an extra large periscope with stairs circling around it. When taking the stairs up or down one can experience a rich range of different views framed by the various openings cut into the structure.
The tower is composed of three prefabricated elements with the roof forming a fourth element. The facades and the stairs are made of larch. The details and the security netting are of steel. The idea was to create a simple wooden structure of high quality in a way that supports learning and reflects a commitment to empowering and strengthening the local community.

The Periscope Tower is situated on the shore of a man-made lake that has been built on top of a hill in the vicinity of the center of the city of Seinäjoki. The man-made lake, Lake Kyrösjärvi, has been created in order to serve three main functions: to help keep the flooding in the plains of Ostrobothnia under control, to generate energy for the electric power plant serving the city of Seinäjoki, and to form an attractive site for a new residential area to be constructed on the shores of the lake. 120 000 square meters of new housing will be built there to provide homes for about 2000 people. The Periscope Tower is part of a larger landscape design project for reshaping the lakeshore, developed by OOPEAA for the Seinäjoki Housing Fair 2016.
With the Periscope Tower, the aim is to activate the dam around the man-made lake and to turn it into a recreational area serving the residents of the new neighborhood to be constructed there as well as others living in Seinäjoki and the region at large. It will be connected to a broader network of recreational paths designed to be accessible to everyone.