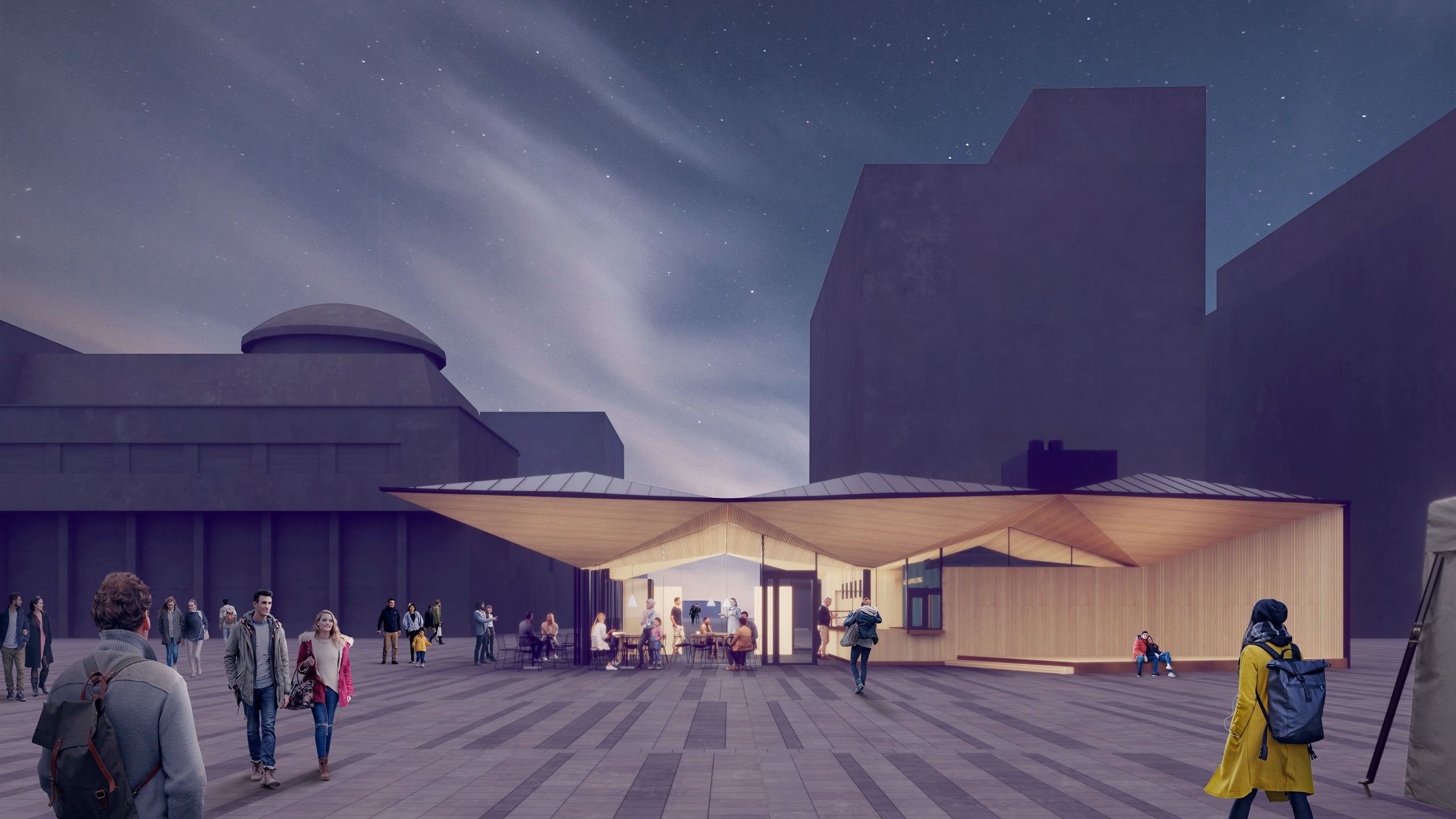 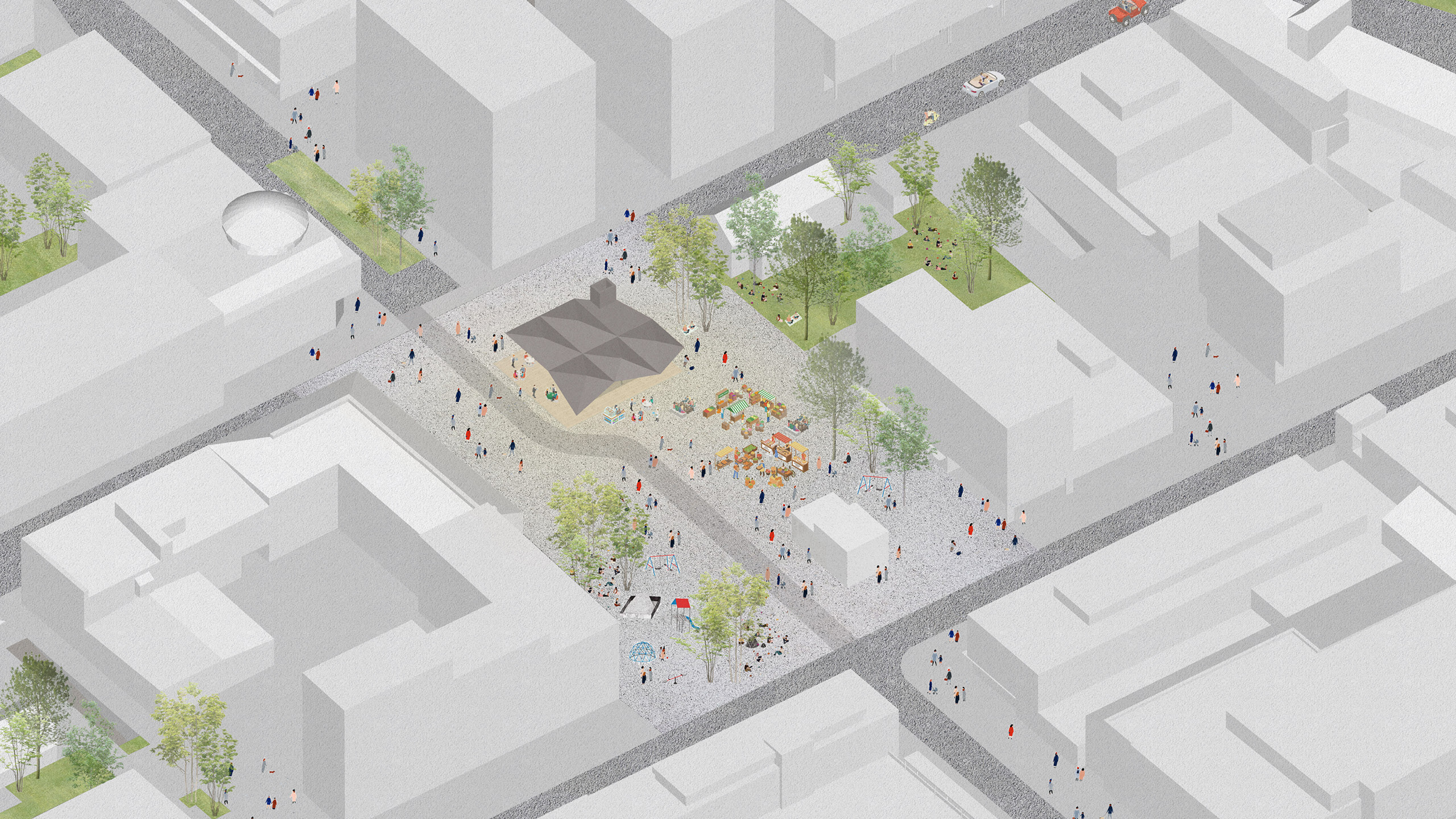 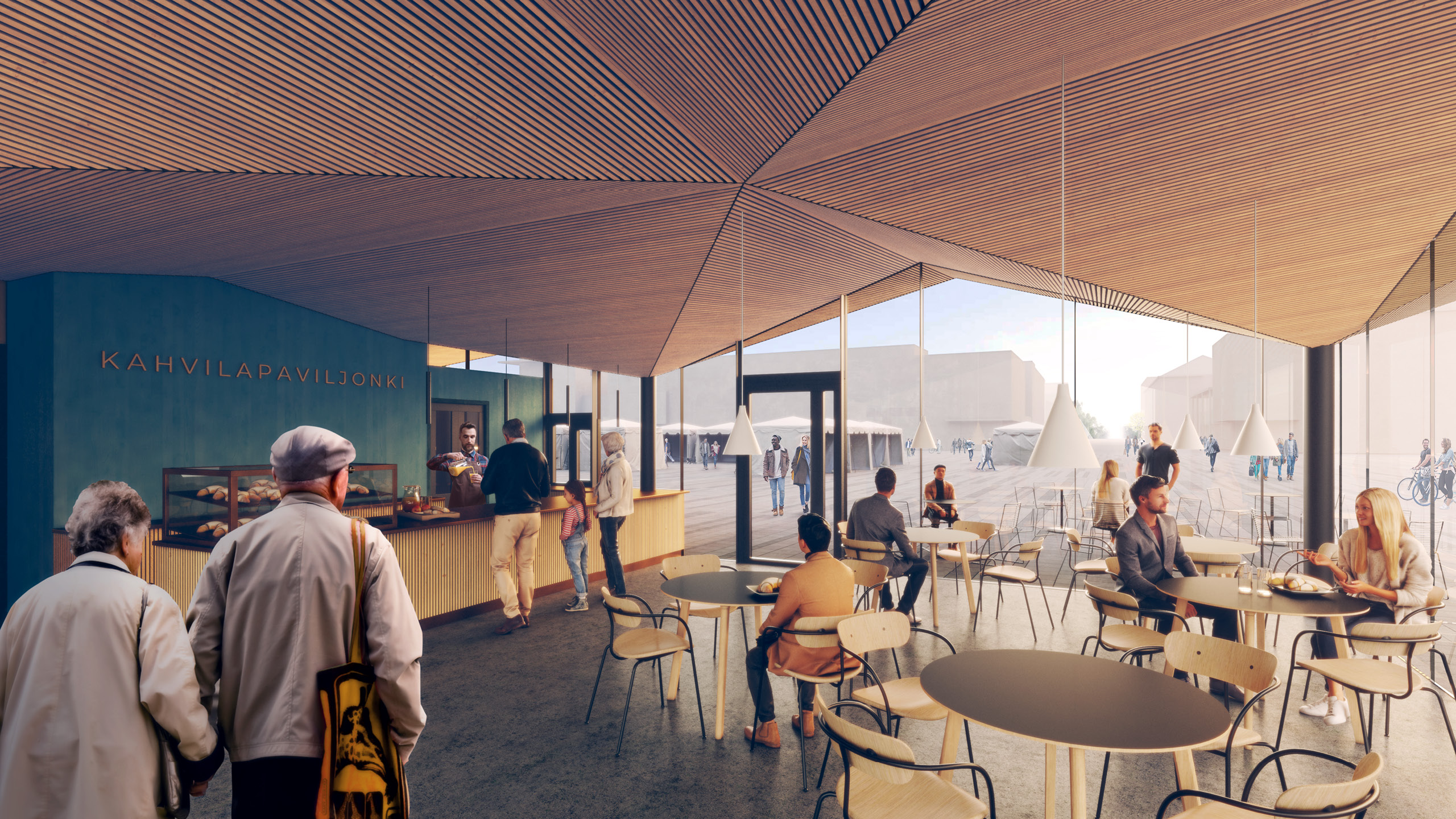 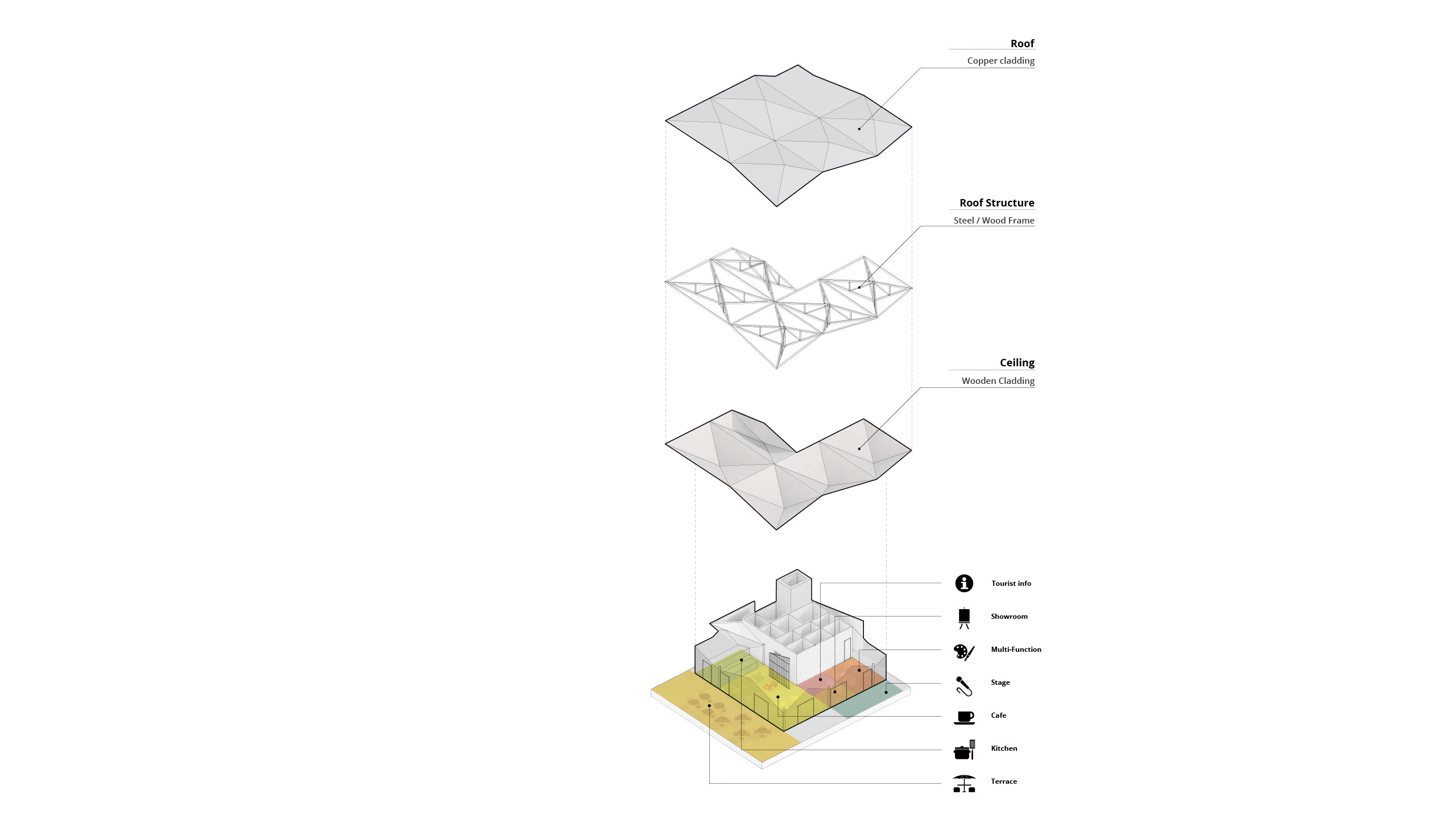 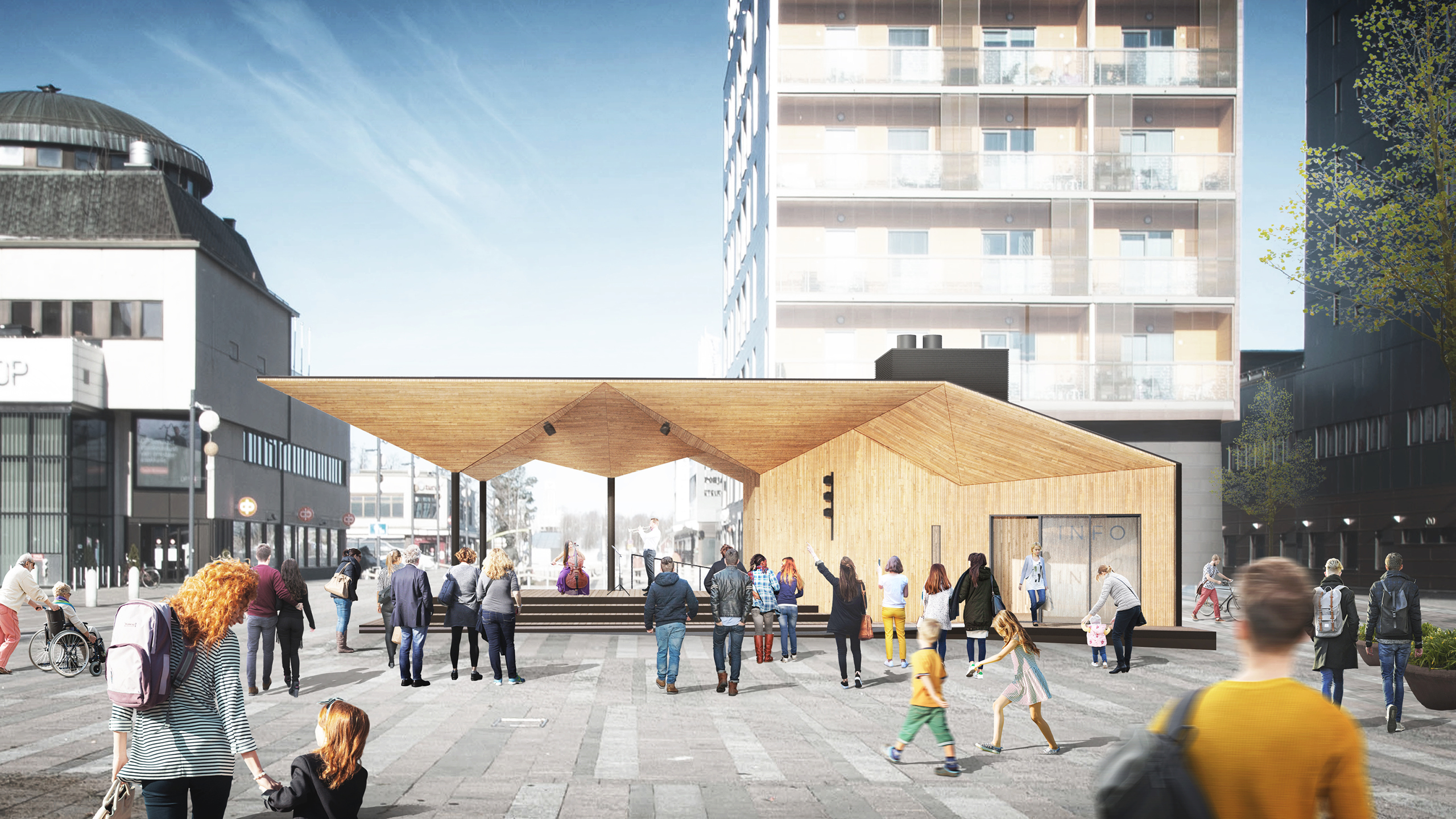 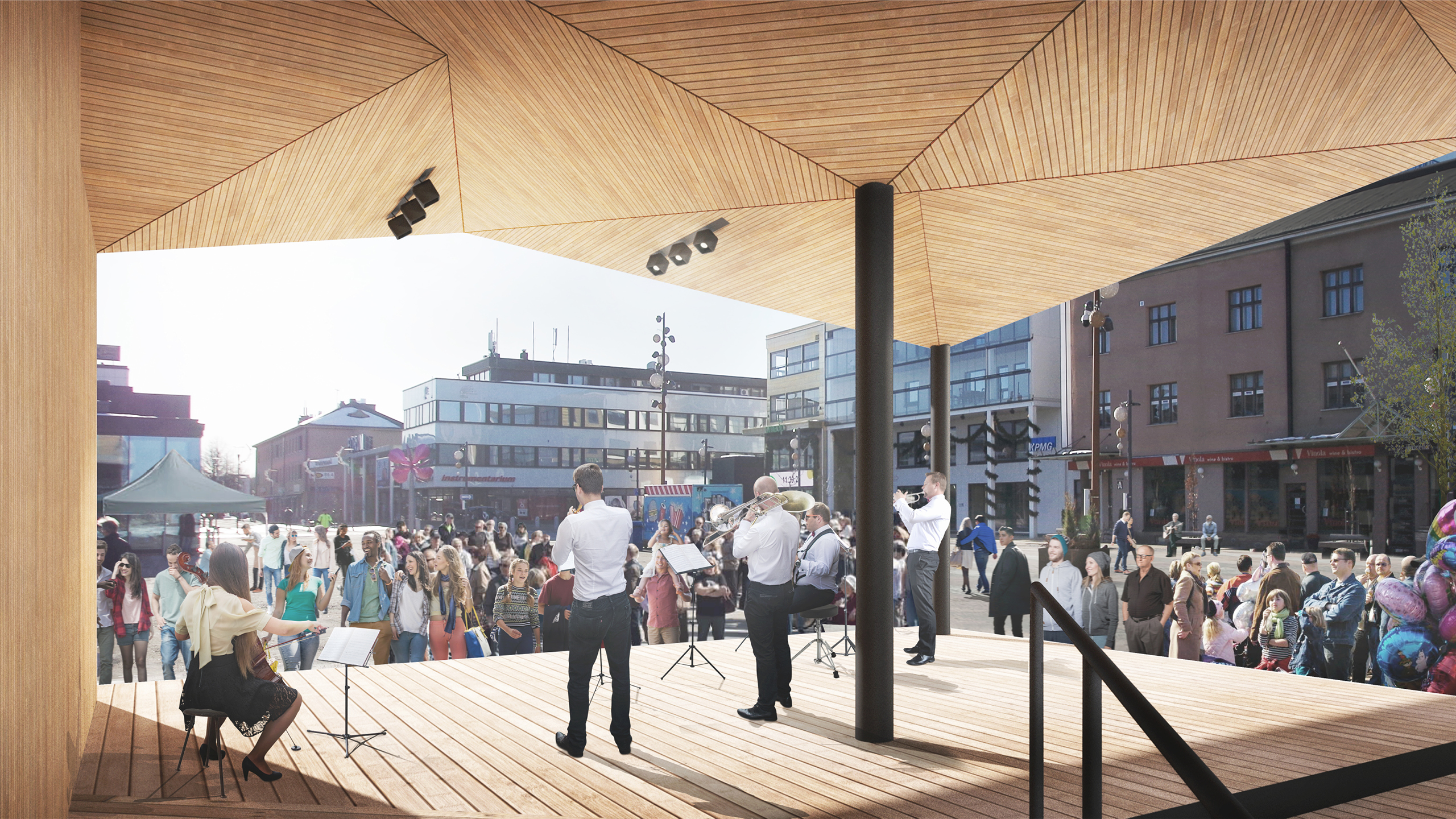 Seinäjoki is one of the fastest growing cities in Finland. Currently the city has about 62 000 inhabitants, the urban area about 150 000, and the region about 200 000 inhabitants. A new Central Square is planned in the center to create a focal point for the public space of the growing city. The square will feature a marketplace, a play area and a multifunctional pavilion with a stage for performances.

The original proposal for the Kontra Pavilion includes a café and an indoor space for people to gather in. Later, an alternative proposal without an indoor space was requested to be developed. After careful consideration of cost, needs, functionality, and feasibility, the city chose to build the pavilion without an extensive indoor space. The construction is slated to begin in the spring of 2022 and be ready for the summer season 2022.

The Kontra Pavilion aims to create a public space that supports the identity and functions of the new Seinäjoki Central Square offering a harmonious counterbalance to the surrounding lively market square with a range of varied of activities. The pavilion forms a key element in the overall image of the square. The flow of urban life in the square continues seamlessly in the pavilion: you are on the square, but under the shelter of a roof, you are in public space, but in a clearly defined place.

The extended eaves of the pavilion offer protection from sun as well as rain creating a platform for events and performances in the square. Allowing for open interaction between performers and audiences in the square, the pavilion firmly takes its place in the public space of the square and gives it a sense of a unique identity. The choice of its materials deliberately creates a connection with the local tradition and enters into a dialogue with the surrounding urban landscape.

The use of copper as the material of the roof and the façade facing the street is a gesture that recognizes the presence of the modern tradition of Alvar Aalto in Seinäjoki. It also offers longevity in the lifecycle sustainability of the pavilion. The use of wood in the ceiling creates a sense of warmth and connects the building with the regional tradition of skilled carpentry. As a local material it is also sustainable. In the original proposal with the café included as part of the pavilion, the use of glass in the walls allows for transparency and makes the activities inside the pavilion visible in the urban space of the square. The pavilion offers people a place in which they can be present in the city, a stage on which to perform events, a place in which to seek shelter from rain or sun and from which to observe the life in the city.